Share2
Tweet
Pin31
Email
More
33 Shares
This article may contain affiliate links where we make a small commission for purchases you make from links that you click from this article. For more details, read the disclosure page.

When travelling, the last thing you want to do is the mental math of converting the price tag to your home currency.  How much do you divide this by?  How much do you multiply?  Do I add a little on top or subtract a little?

Many years ago, there we discovered a nifty little tool called the Oanda Currency Cheat Sheet (also called fxCheatSheet) that was a low-tech printout of currency exchange numbers. While yes, you could totally pull out Google or a foreign exchange app, this remarkable simple currency conversion cheat sheet is something that I always keep in the wallet

Other travel tips you need to know about

How can you save money on car rentals?

The very first version of the pocket-sized currency conversion cheat sheet came from a Canadian foreign exchange company called Oanda and is the inspiration for the latest version we have today.

For those that know about them, have used them, and wonder where they've gone, here's a bit of background information and a little nostalgia as well.

How we first discovered them

When we did our epic summer backpacking trip through Asia, I randomly stumbled upon their currency converter. Similar to Xe.com, they offered live-updated exchange rates for currencies around the world.

It worked well and what really set Oanda apart from Xe was the fact that they had the ability to put in an interbank rate and also something called a “Traveler's Cheatsheet”.

Over the years, Oanda has evolved their cheatsheet. It started off being called the Oanda fxCheatSheet, then became Traveler's Cheatsheet, and finally it was integrated into the currency converter tool.

In the past few years, you could tell that there wasn't as much of an emphasis on the Oanda cheat sheet.

What happened to the tool?

What started off as a brilliant printable currency converter simply disappeared in the wind. As priorities changed with Oanda and their need to update the user interface forced the platform to evolve, they simply removed it completely at the end of 2021.

We've reached out to Oanda a couple of times to find out if there are any plans to bring it back but we never heard back.

It's safe to say that it's now gone forever.

That is….until we had a brilliant idea from one of our readers!

Quick cheat sheets on currency exchange are a must-have while travelling from our years of experience and we still say that now despite the ease of access to apps and cellular data.

Taking the Oanda cheat sheet as inspiration, reader, Karen Golec decided to build her own tool in Excel to do the exact same thing.

She kindly reached out to us and all we did was jazz it up a bit and make it easier to use within Google Sheets.

The printable currency converter works very similarly to how it did before except a few things:

Get the Currency Cheat Sheet Tool

Simply subscribe to be an Insider and get access to the exclusive currency cheat sheet in the form of a Google Sheet. Once you submit your e-mail, a download link will appear. You'll also be enrolled in the weekly flight deal newsletter!

How to read the currency conversion cheat sheet

There are a lot of numbers on the cheat sheet. How exactly should a traveller be using this printable currency converter?

The example above is for someone that wants to converts Canadian Dollars to Euros.

When you're in a European Union country such as the Netherlands, you'll look at the right hand side of the chart. Let's say you want to buy something that's 500 EUR using a credit card and want to figure out how much it'll be on your statement, you'll see that it's $706.15 CAD.

How about the left hand side? This is the exact inverse of what you see on the right side with the interbank rate factored in. Normally, you won't use this side of the cheat sheet much but if you're in a bind and want to see how much the home currency in your pocket (CAD) can be worth if converted to EUR, this is a general guide.

That said, the rate wouldn't be the most accurate since the above example has the interbank rate set to 3% which is the average for most credit card foreign transaction fees. If you end up changing money at a kiosk, this will be much higher (5%).

What is the interbank rate?

The interbank rate is a term that comes from Oanda's tool that essentially represents the additional cost that financial institutions (banks, credit cards, and currency exchange kiosks) will charge on top of the real exchange rate. This is essentially a transaction fee as a way of making money.

This is a general rule of thumb:

For the tool, you pick the rate you want to use depending on whether you think you'll be using your credit card the most, cash exchanged at a kiosk, or withdrawing from an ATM.

Get the Currency Cheat Sheet Tool

Simply subscribe to be an Insider and get access to the exclusive currency cheat sheet in the form of a Google Sheet. Once you submit your e-mail, a download link will appear. You'll also be enrolled in the weekly flight deal newsletter!

Why use a pocket-sized and printable currency cheat sheet over an app?

This is the elephant in the room I'm sure. Why go through all the trouble of using this tool, entering the numbers, printing it, and laminating it as well?

To a large extent, this is a preference for travellers that like to have something in their hands. You're willing to sacrifice live-market numbers for a quick-look chart that can give you a good idea of how much something costs.

For us, a big reason why we continue to use the currency conversion cheat sheet is because we can apply an interbank rate so you get a bit more of an accurate picture of how much something is really going to cost you.

Lastly, by using a printout like this, you can also avoid pulling out your phone in a busy market if safety is concern.

What happened to the Oanda Currency Cheat Sheet?

The Oanda currency converter cheat sheet no longer exists and can't be found on the website anymore.

How can I get access to the currency conversion cheat sheet?

The currency conversion cheat sheet tool is for members only. There is a sign up form in the article that will provide you access.

Yurts in Ontario – From Basic to Glamping521 Total Shares

When Is The Best Time To Go To Iceland?268 Total Shares 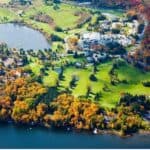