Where I was when I wrote this: Finally willed myself to get back into blogging mode about a month later.  I didn’t get to do any blogging on the road for the last leg of my trip.  There just weren’t any natural breaks that allowed me to sit down to process photos and write at the same time.

It was a bittersweet last morning in Shanghai.  Sleeping in slightly, I finished packing and had an early lunch with my Grandpa.  Once 10:30 rolled around, it was a crazy rush as I said goodbye to my Grandma, and my Grand-uncle and Grand-aunt next door, then out to call hail a cab.  As the cab driver loaded the car I hugged my Grandpa.  Then it was one of those moments where you’re reaching back to say the right words but you’re holding your tears back.  I only got out the words “Thank you” before I had to fight the tears back got into the cab.  It was a great month in Shanghai and even better I got to spend time with my grandparents.  Hopefully I’ll be back to visit soon with my parents.

10 minutes into my ride I realize that shit…I was in such a rush to get out of my house that I forgot to ask my Grandpa for some extra cash for the cab ride.  I do some math in my head and yup I definitely don’t have enough but wait a second…I do have some money on my transit card.  I ask the cab driver who is unusually chatty and to my surprise he said I could totally split the payment between cash and card.  Phew saved.

Shanghai airport was the usual and in a jiff I was on my first Air China flight to Taipei.  The aircraft was a bit older and maybe psychologically not as clean.  Something strange did happen here though.  I got to my assigned seat and a few minutes later another lady comes by telling me to get out of her seat.  We compare boarding passes and somehow we got assigned the same seat which I can’t even begin to explain how that happened.  The flight attendant takes our boarding passes to double check and it looks like they totally messed up.  To my benefit though, I get upgraded to Business Class which was a pleasant surprise for this 2 hour flight. 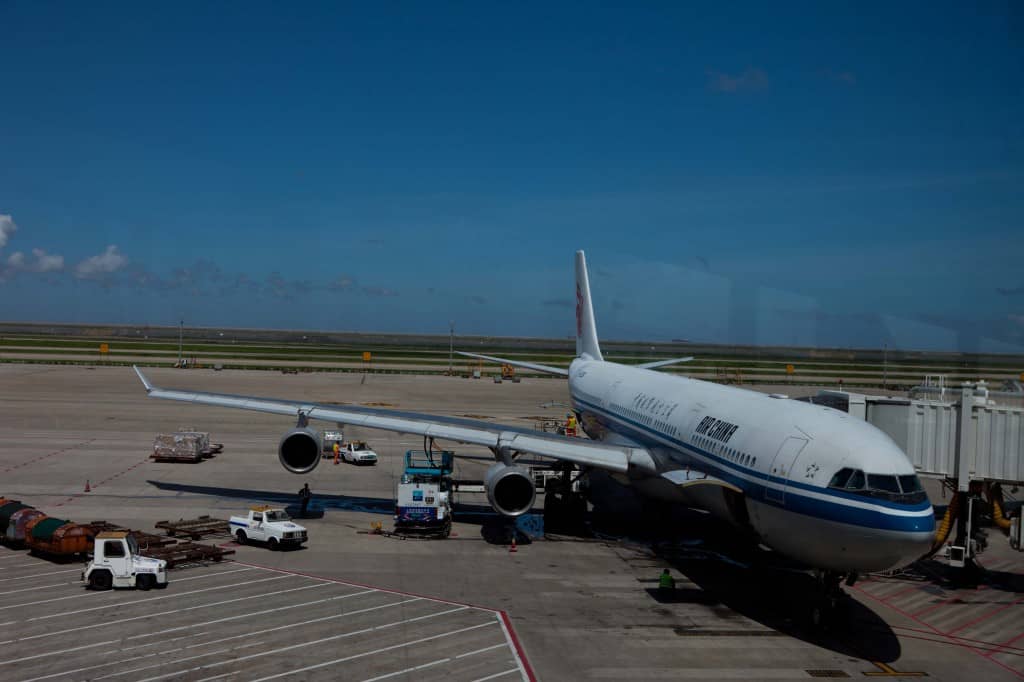 Now if we rewind back a little, there was little something called a Typhoon Vicente battering Hong Kong the night before and it was up to a No. 10 so it was kind of serious.  I was meeting up Joanna in Taiwan and this presented a serious problem because flights out of Hong Kong were getting cancelled the night before which meant Joanna’s flight from Hong Kong to Taipei would either get cancelled or delayed.  So come Tuesday of course her flight is delayed and instead of her arriving @ TPE earlier than me, I was going to get there way earlier than her with no real idea of when or if she’d get to Taipei.

After landing in Taoyuan Airport in Taipei I get out pretty quickly and since I got a Whatsapp message upon landing that Joanna was able to get on an “earlier” flight that she still wouldn’t be able to fly out until 7 or 8pm, I headed straight to the bus station.   I eventually figure out that bus 2060 is the bus to take me near the City Hall where the W Taipei Hotel is.  I take my bags outside to wait for the bus and I am greeted with a whoosh of hot sweltering humid air.  So it’s more or less the same here as Shanghai.  My god though…the bus was incredibly slow.  I was about to go postal when the bus was seriously going 40 km/h on the highway when there was any sort of uphill incline.  I couldn’t tell whether the bus had problems and he couldn’t downshift or he was just a terrible drier.

After being dropped off by the double decker bus it was only a 10 minute walk to get around the bus terminal and into the front entrance of the W.  This is my first W experience so I didn’t know what to expect.  You walk in and immediately know this is something different from all the other hotels I’ve stayed at a hotel.  Simply put it’s a super swanky club-like hotel.  The lights are dim, purple glow lights, lounge music playing in the background and contemporary deco and furniture.   The only disappointment with the W was their lack of benefit for Platinum members but I’m sure you don’t want to hear about that.  The room is just as modern and contemporary as it is in the lobby (more pictures in the next entry).  I get settled in and with the abundance of time I had I decided to check out the Ximending area.

Exploring On My Own

The subway system is pretty neat here.  Instead of giving you a card or ticket for single-way fares you get a poker-chip kind of thing that you tap the reader when you’re going in and into a slot when you’re exiting.  Pretty neat!

The Ximending area is pretty lively at night and you get a sense here what Taipei is all about – shopping and small eats.  I checked out a few shops along the way and eventually found my way around a CoCo for bubble tea, matcha sticky rice thing on a stick and pancake-like thing with stuff inside (do these things even have English names?). 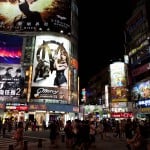 Right ou of the subway station 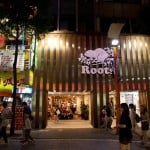 Whoa they have Roots here! 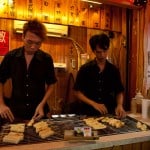 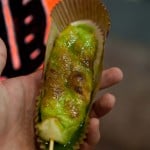 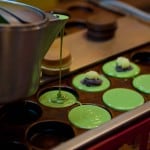 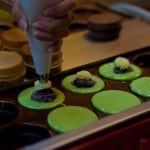 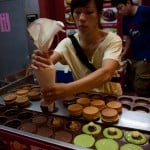 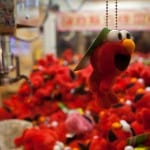 They have these game centers EVERYWHERE in Taiwan. Claw-me-up-Elmo. 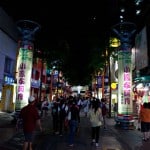 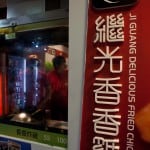 By about 9:45 I figured I needed to head back since Joanna’s flight was supposed to get in at 9:30.  I got back to the W and waited downstairs in the lobby.  Joanna finally stepped out of the elevator at 10:30 or somewhere around there.  Long day for her since she practically hung out at the airport glued to the departure monitor from 10am to 7:30pm.  We thought we’d squeeze in a night market before we called it a day since that was in our original plans and after dropping her bags off I was out again to head to Raohe Market.   We got there just before midnight and by then a lot of the stalls on the street were closing down.  Lucky for us though, the temple at the gate of Raohe was giving out free tong sui (selection of red bean and rice soup, grass jelly and mochi balls) because there was some sort of festival going on.  Nothing beats free food as I scarfed down two bowls of that.  I also got some bun pastry with meat inside while Joanna got some sort of cactus drink that really tasted like normal fruit punch. 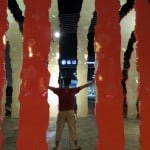 Some random art installation on our way to the market. 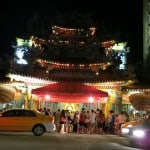 Lots of people lining up for something…which later turned out to be free food! 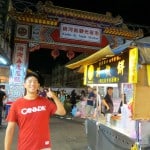 Me at the Raohe Night Market gate. 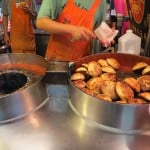 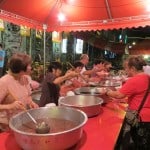 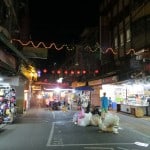 I guess the party is over 🙁 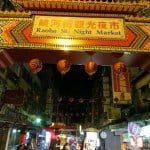 Before cabbing back we dropped by a 7-Eleven to stock up on some instant noodles since we weren’t sure what the conditions would be like in Palau.  You’ll find out later how that went.

Want to read more about Palau, read the next couple of entries starting with Day 65 – Taipei to Palau – Here We Come!