Instant noodles for breakfast just wasn’t going to do and since the West Plaza Malakal was walking distance to Sam’s we went straight in for breakfast at the shop.  French toast.  Things are getting started on the right foot at last!

Our dives today were with dive master Siksei (yep pronounced sexy), captain Charlie, and jelly master Dustin on the Silkyshark boat.  All the other divers on this boat were new to us so we had to introduce ourselves again.  We were able to connect most with two Germans that were around our age – Katya and Roland.  They would be on our dives pretty much for the rest of the trip.

The weather was still a bit cloudy as there was some rain right around breakfast but things were slowly clearing up. 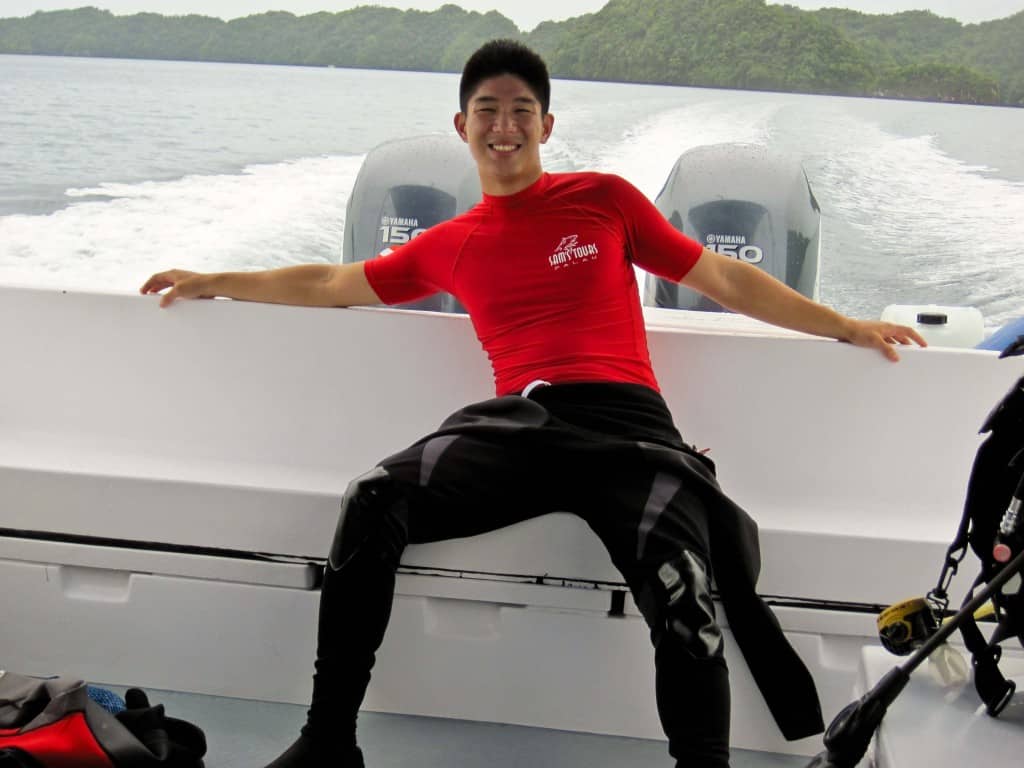 (Dive 1 – 54 mins, 25.3m)  It took about 50 minutes to get to our first dive site called German Channel.  This place is neat because before the Japanese ran the place, Germans actually owned it and did a lot of mining.  To be able to move their cargo with their huge ships they actually had to dig a deep channel to let these ships through.  Siksei was not as thorough as Dexter I would say but he sure tried to maximize the dive times as much as possible.  For both dives I hit close to 30psi.  For this dive the highlight was definitely the HUGE stingray that was at the bottom of the channel.   It lay still even after some Chinese/Japanese divers swooped in with their crazy cameras.  We’re talking wingspan of maybe 4-5 meters.  Crazy.  After that there were at least 10 white and black tip reef sharks near some rock reef.  Coral was decent.  Large schools of fish including barracuda were swimming around us.  There was also apparently a turtle that a few caught a glimpse of but I missed.  The water was definitely a lot calmer than the previous day so entry and exit was a lot easier. 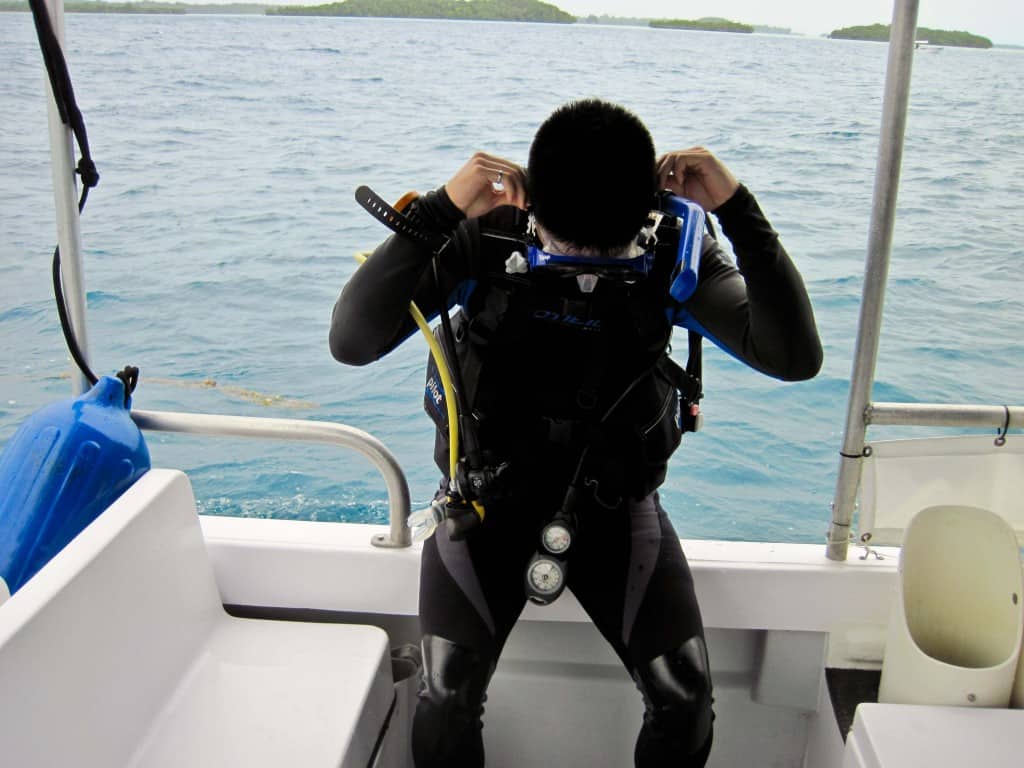 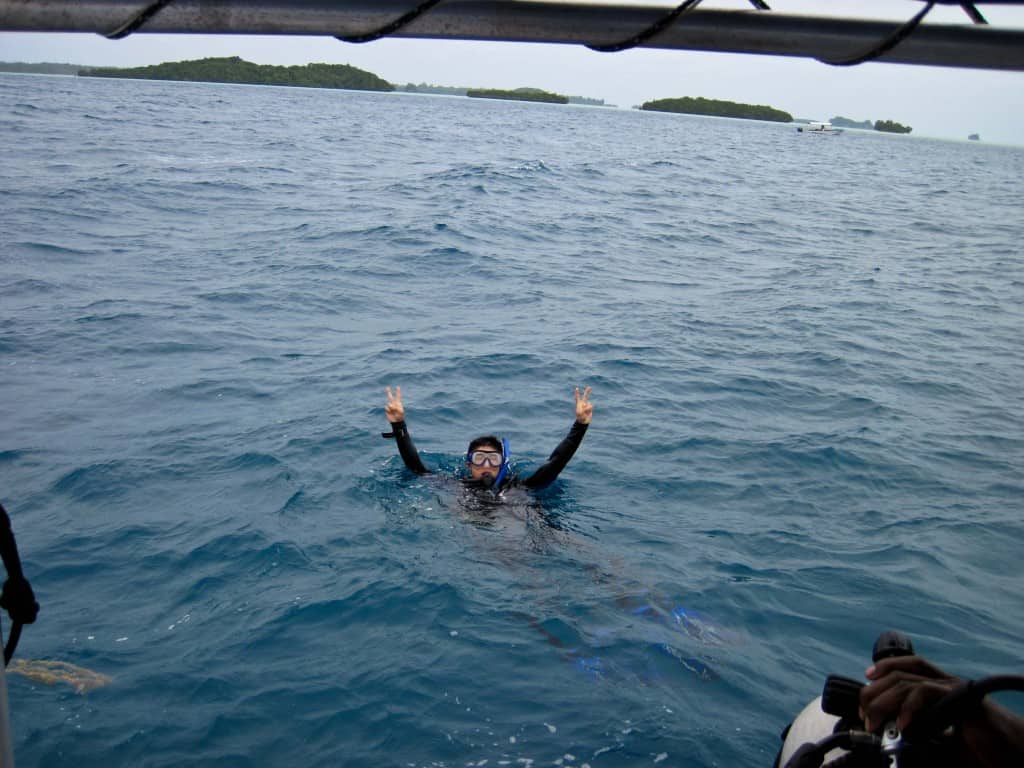 For lunch we went to an island and actually got off this time to sit at one of the benches with all the other divers (Sean, Dennis, Alex, Katya, Roland).  There was also a bit of time to take some photos of the beach and lounge around before we head back out again. 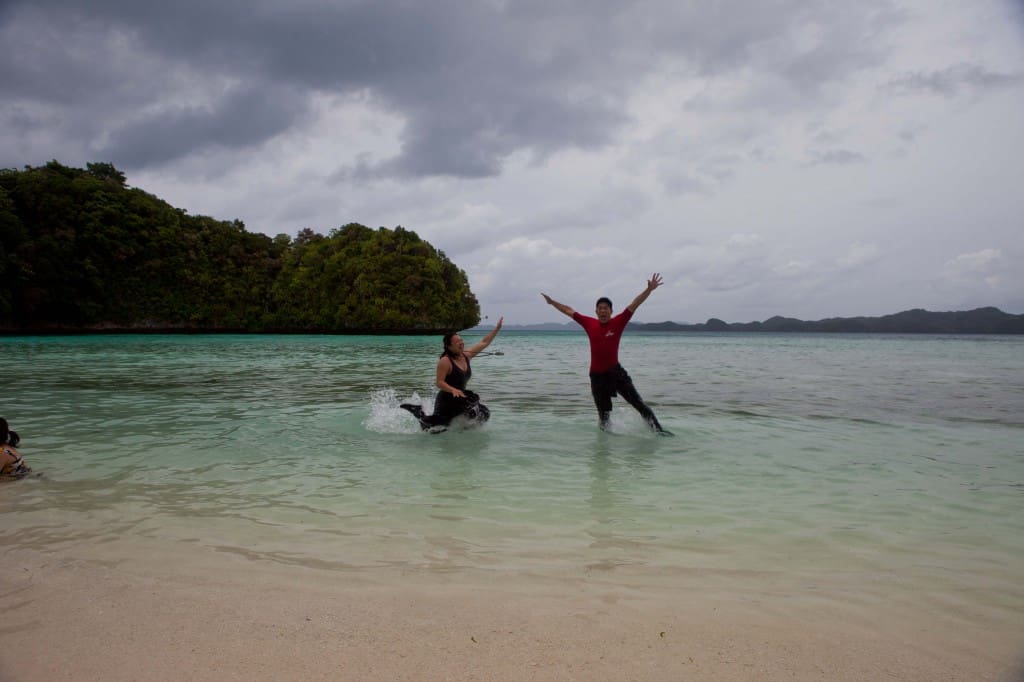 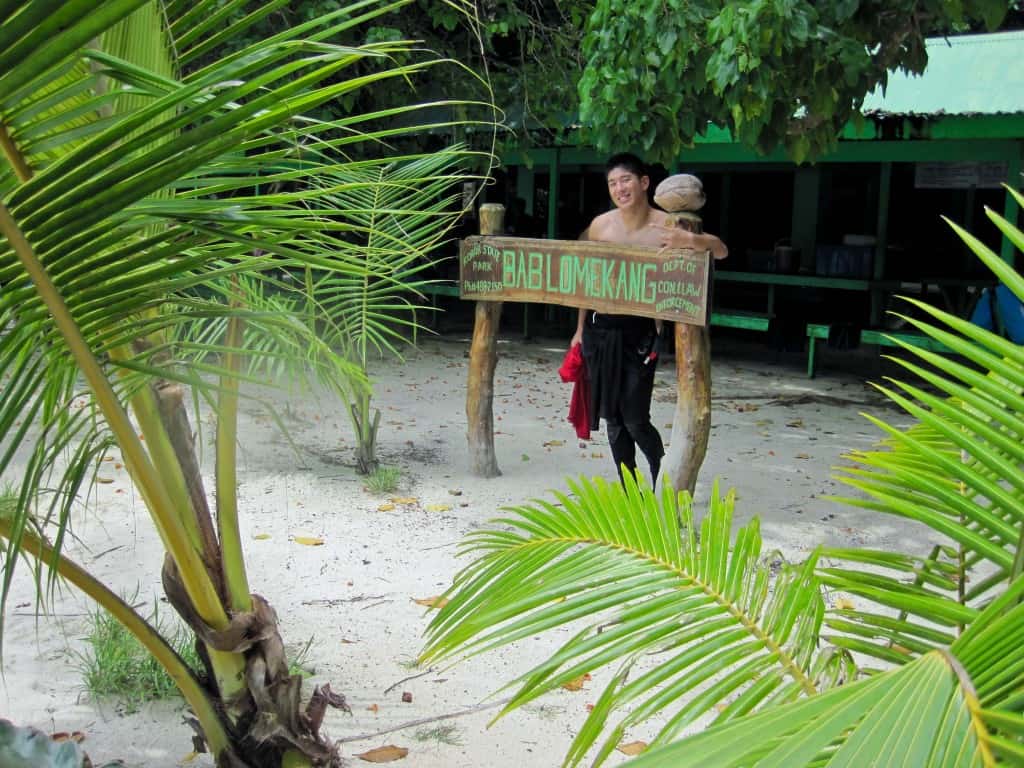 (Dive 2 – 54 mins, 25m) This dive was at Ngerchong Inside (not to be confused with Ngerchong Outside).  We didn’t get to see anything huge here so it was more about the smaller things.  We saw two small octopus, one leaf fish, cartoon like starfish, many reef sharks on the floor and a beautiful coral garden towards the very end. 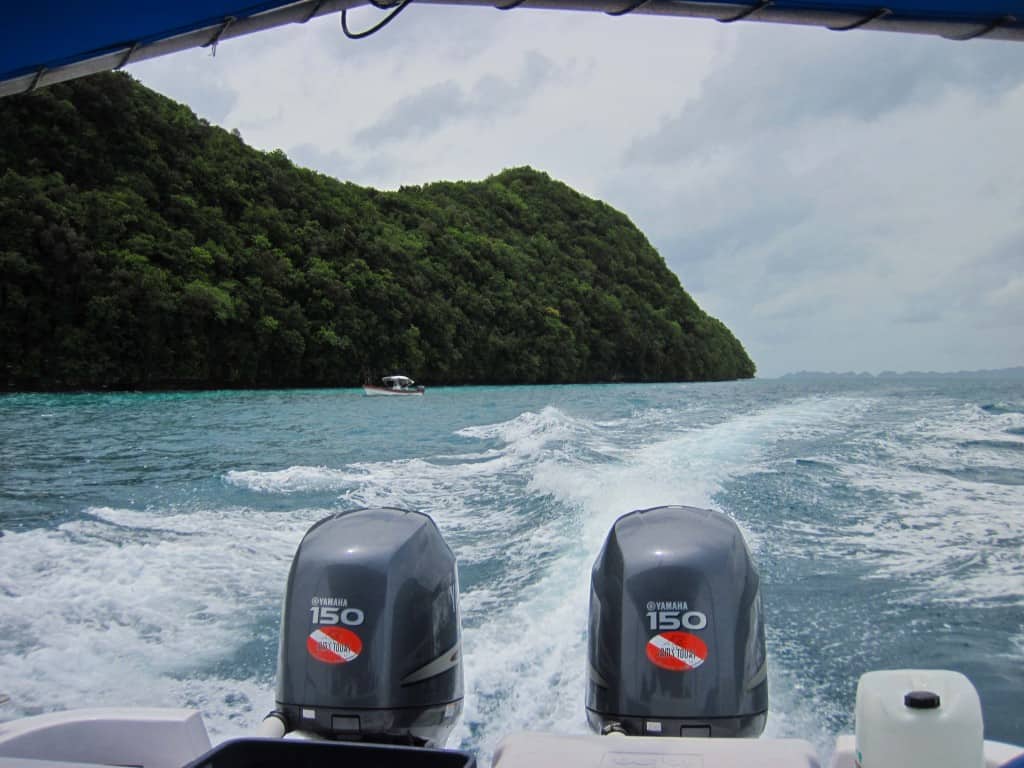 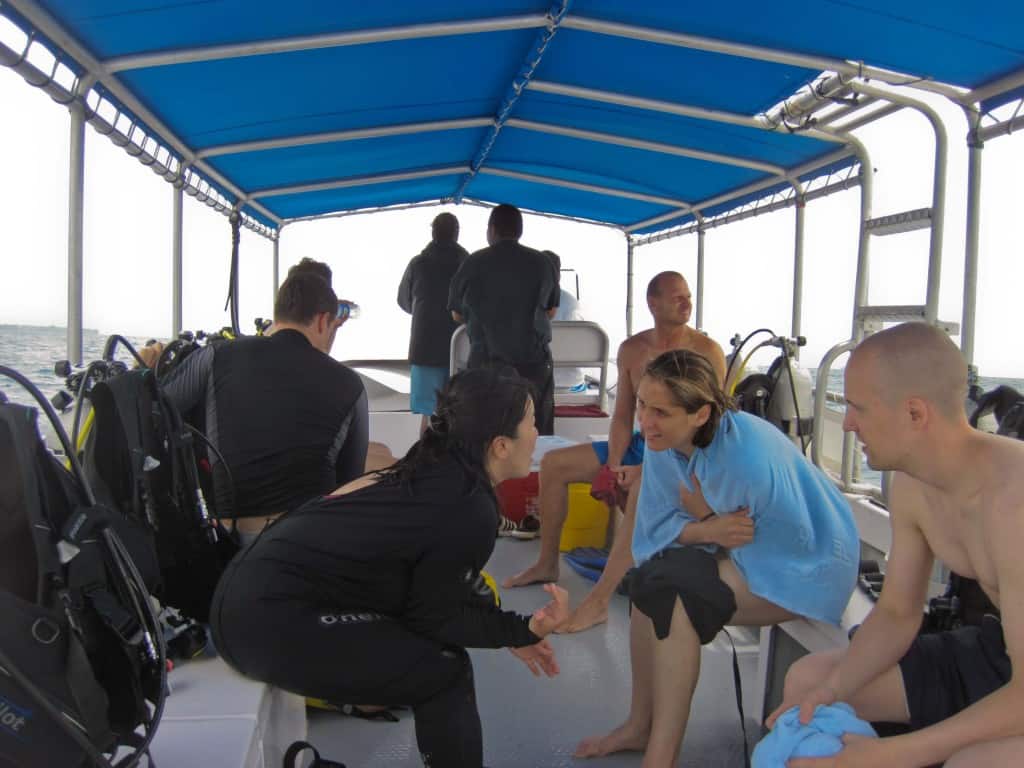 Then of course we finally got to the star attraction and one of the main reasons why Joanna even heard about Palau and then eventually told me – Jellyfish Lake.  The lake itself is 12,000 years old is comprised of primarily millions of golden jellyfish.  Now I thought about the whole stinging thing but we were told that even if they do sting you these jellyfish can’t do anything powerful enough to harm us.  Only snorkelling is allowed and is a short hike from the dock but once you’re in the water and surrounded by these jellyfish you’re totally transported to another world.  As you’re floating at the top you’re literally looking down below at hundreds of tiny, medium to large jellyfish just minding their own business and swimming up, down or sideways.  I tried a few times to dive  a little deeper to get right into the water but those attempts failed and on one try Joanna saw my fins slice a jellyfish in half.  So sorry!  Despite my brutal homicide, it was fun taking pictures, posing with the jellyfish and touching them at their heads and not their legs.  Things were kind of ruined when the Chinese tourists came along with their yelling and shouting so we left soon after. 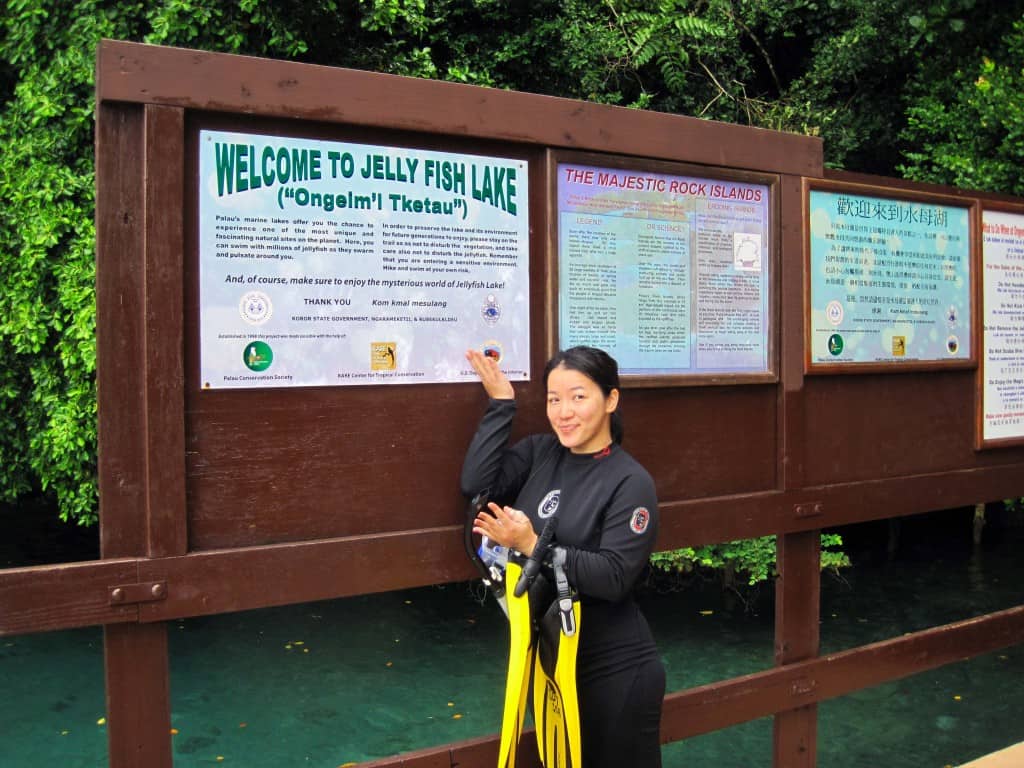 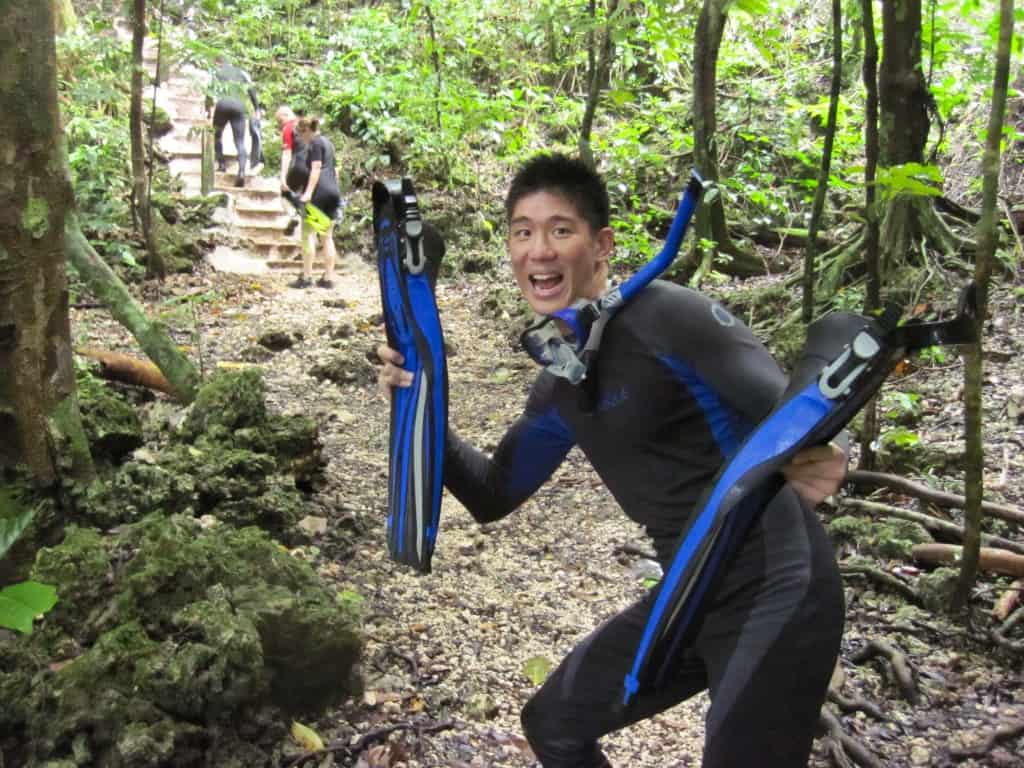 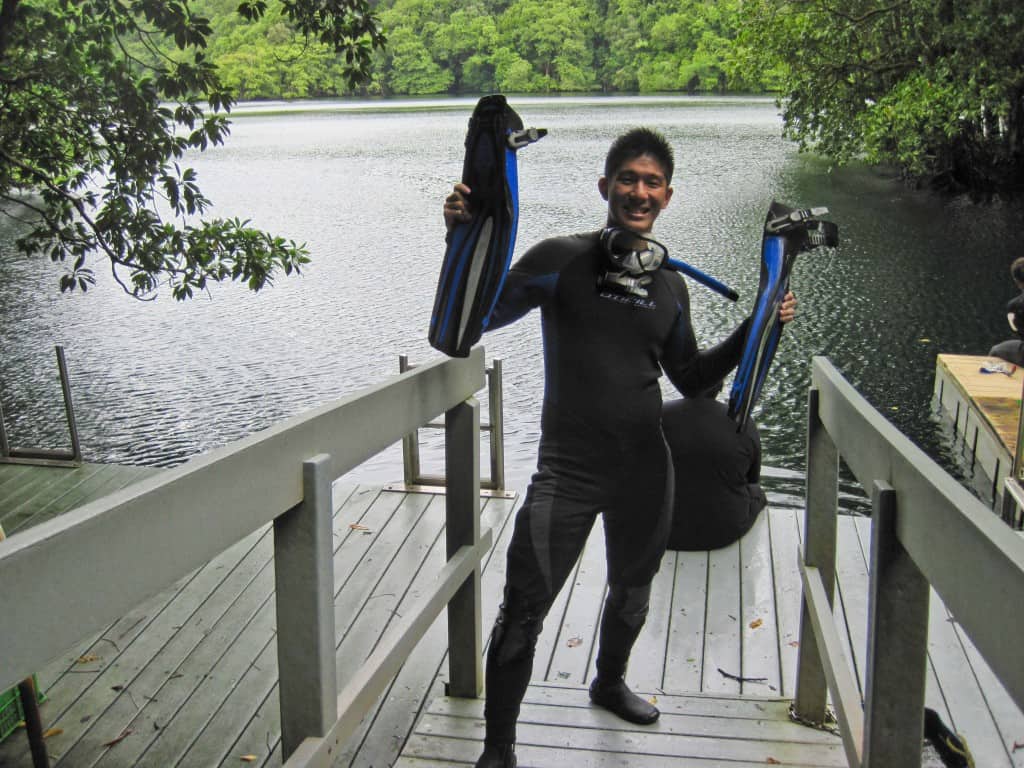 Get ready for a bunch of jellyfish photos.  Had some time to do a bit more Lightroom magic here so enjoy! 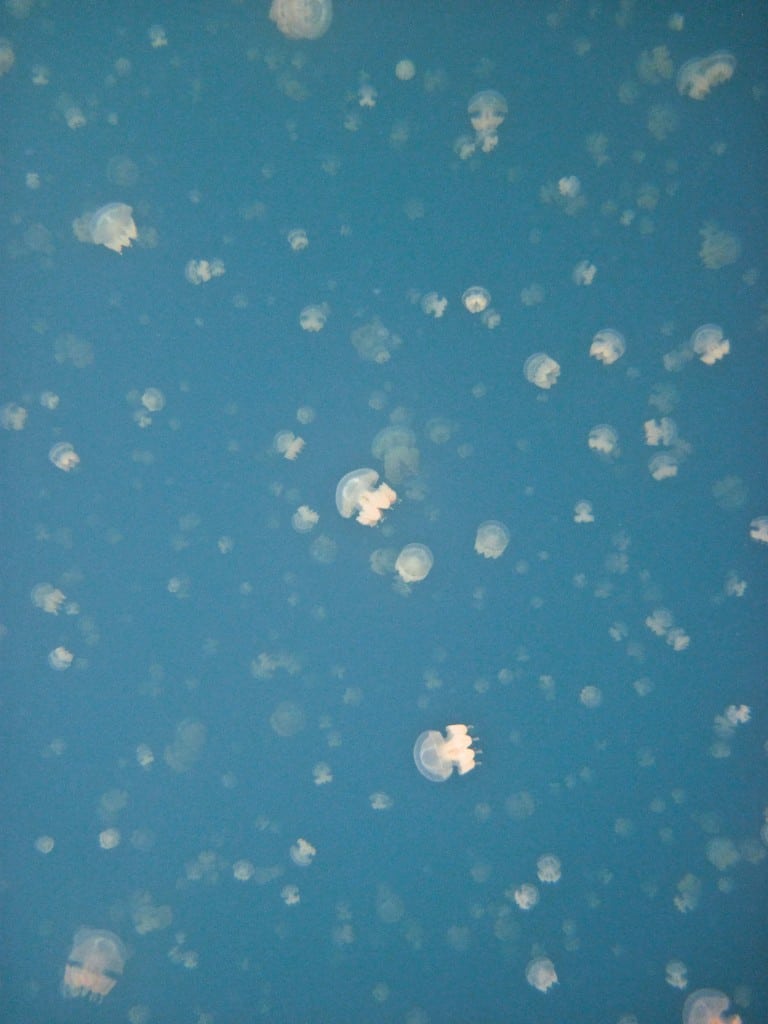 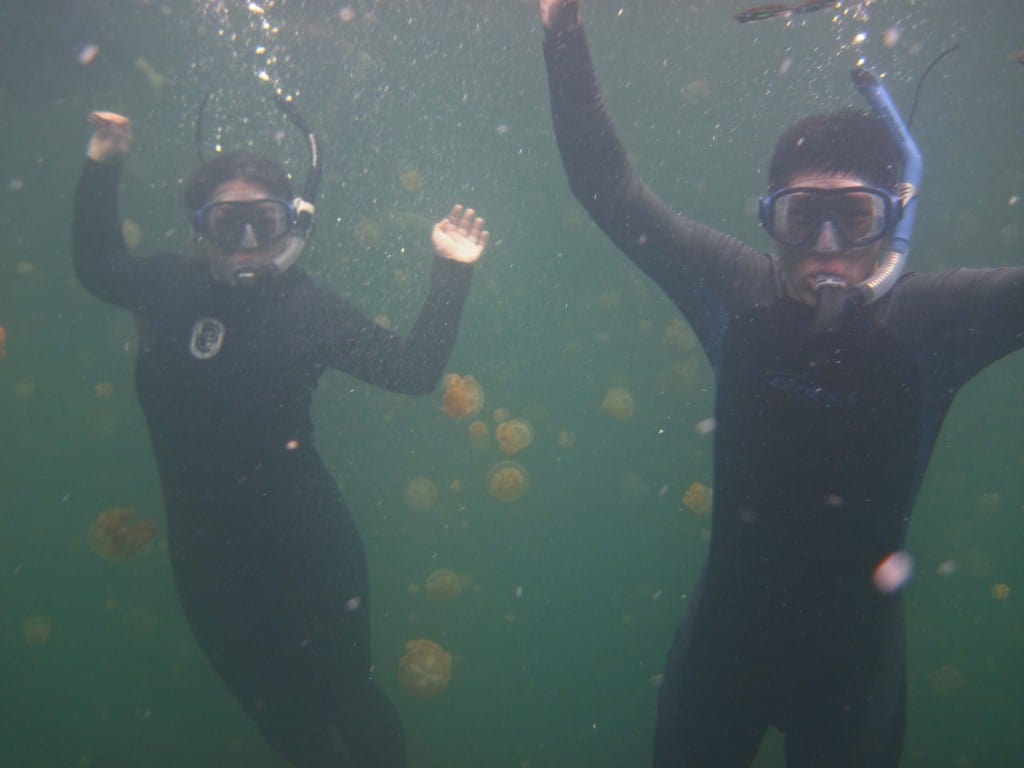 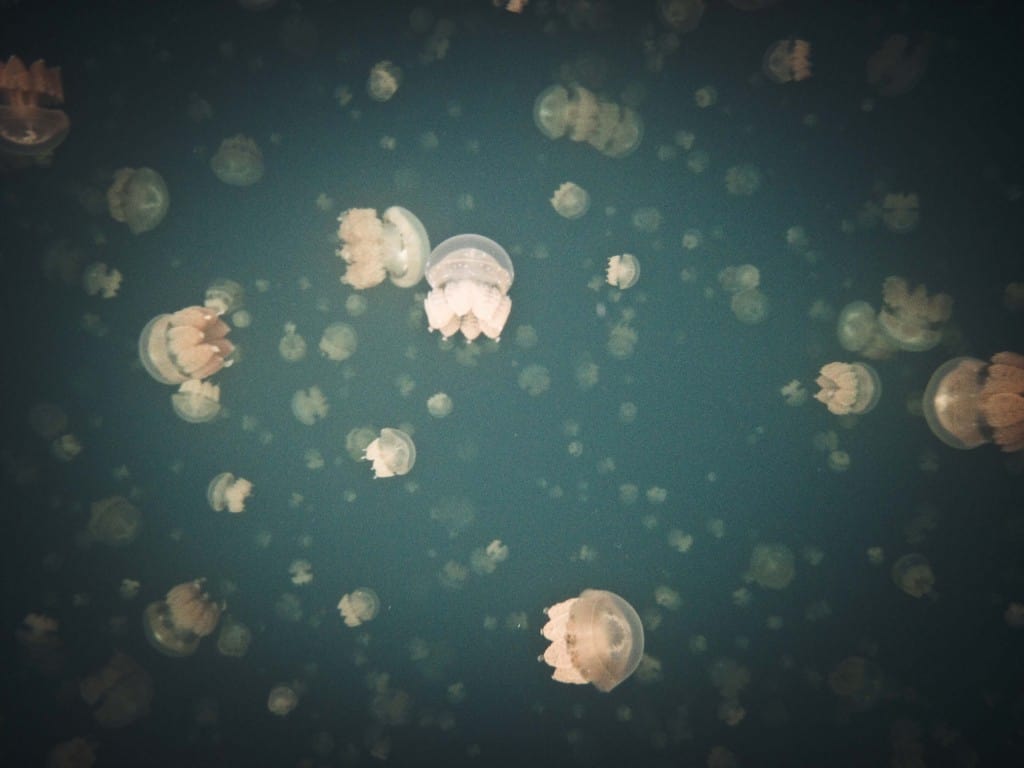 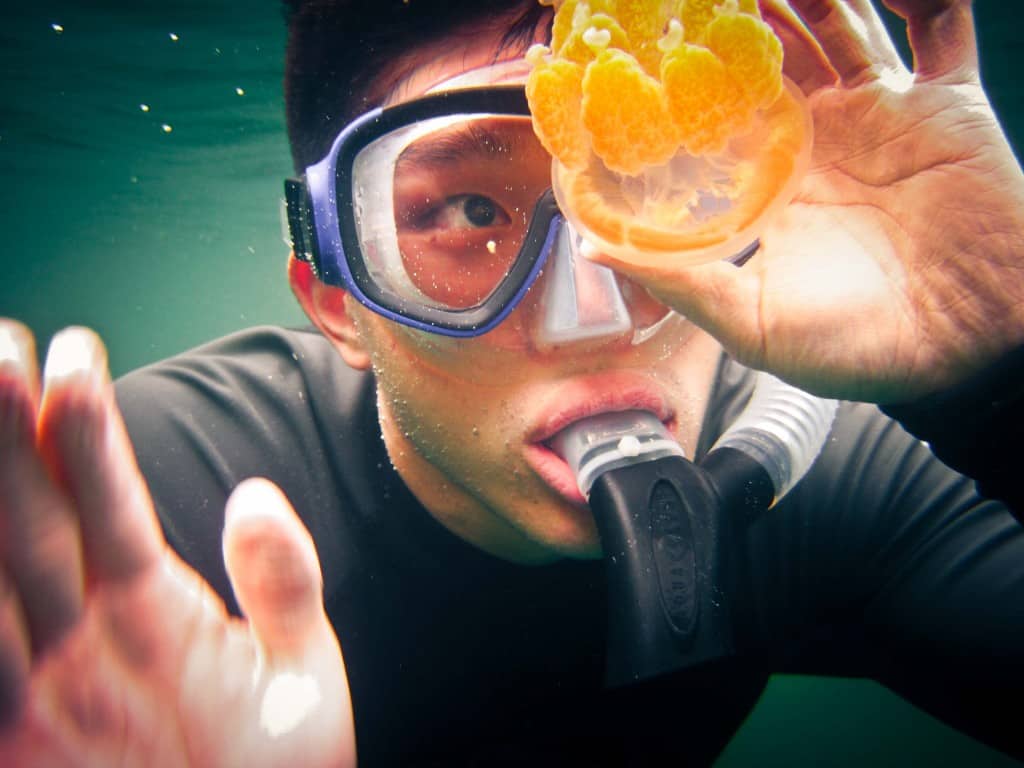 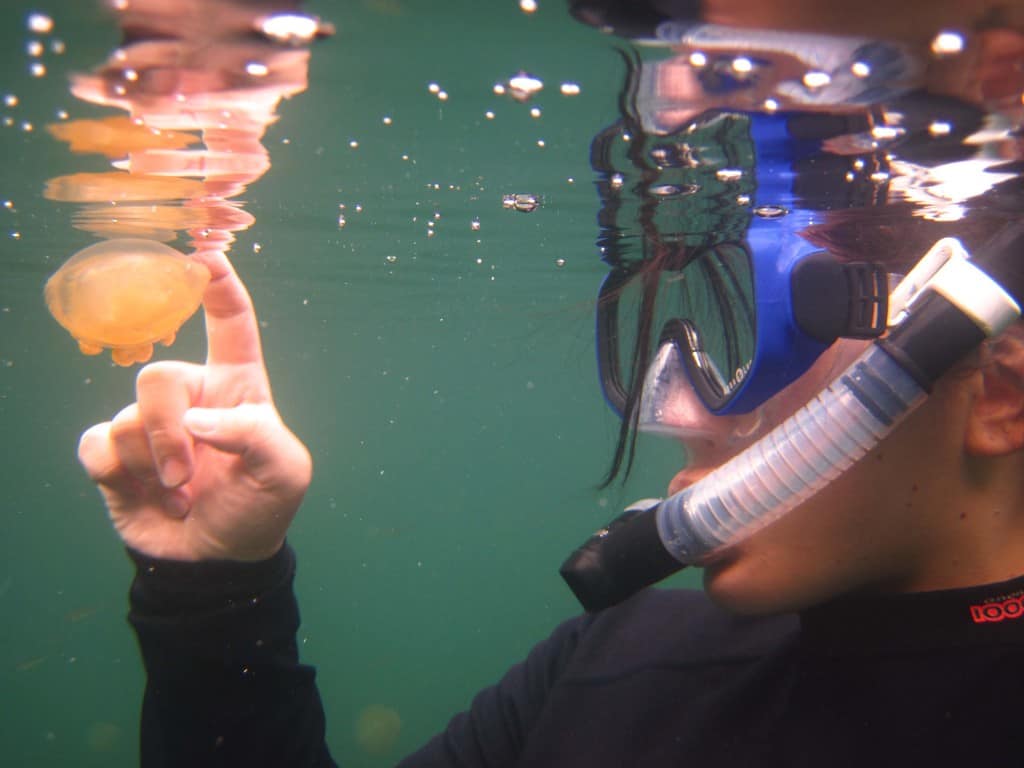 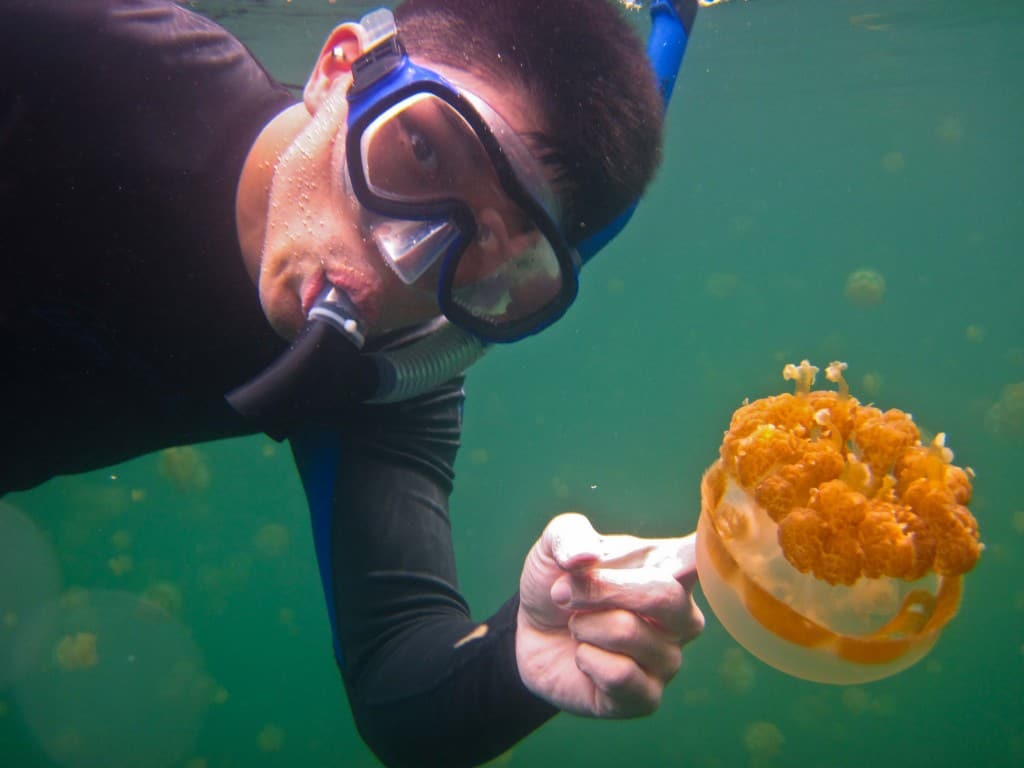 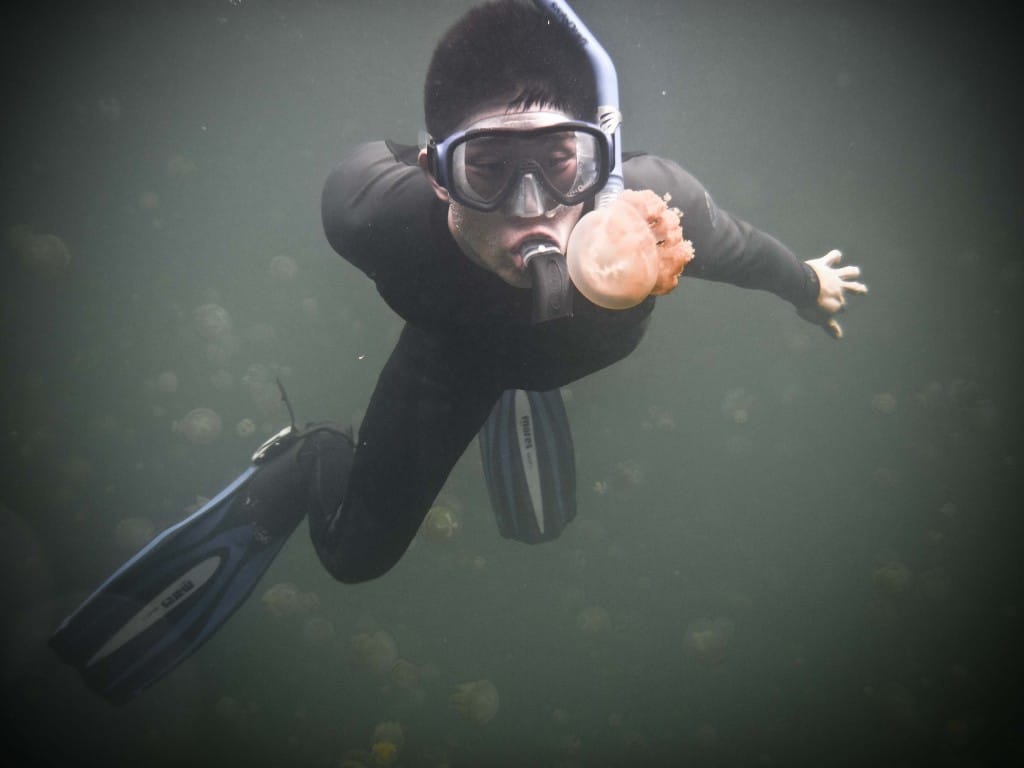 In total I think I must’ve peed three times on these two dives.  Not that you need to know but after awhile the whole peeing process becomes somewhat more natural.  Just make sure nobody’s around you or downstream haha. 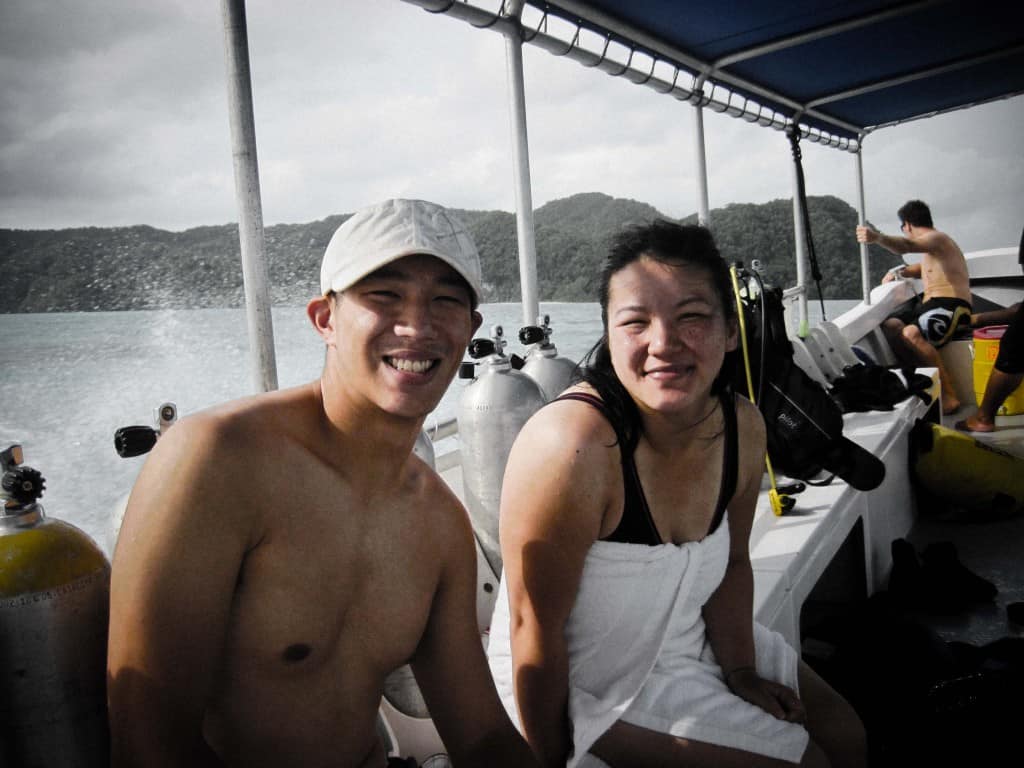 Once we got back to the shop we hung out at the shop for a bit with the rest of the gang.  For dinner we told them we were thinking about checking out the highly rated Indian restaurant called Taj. 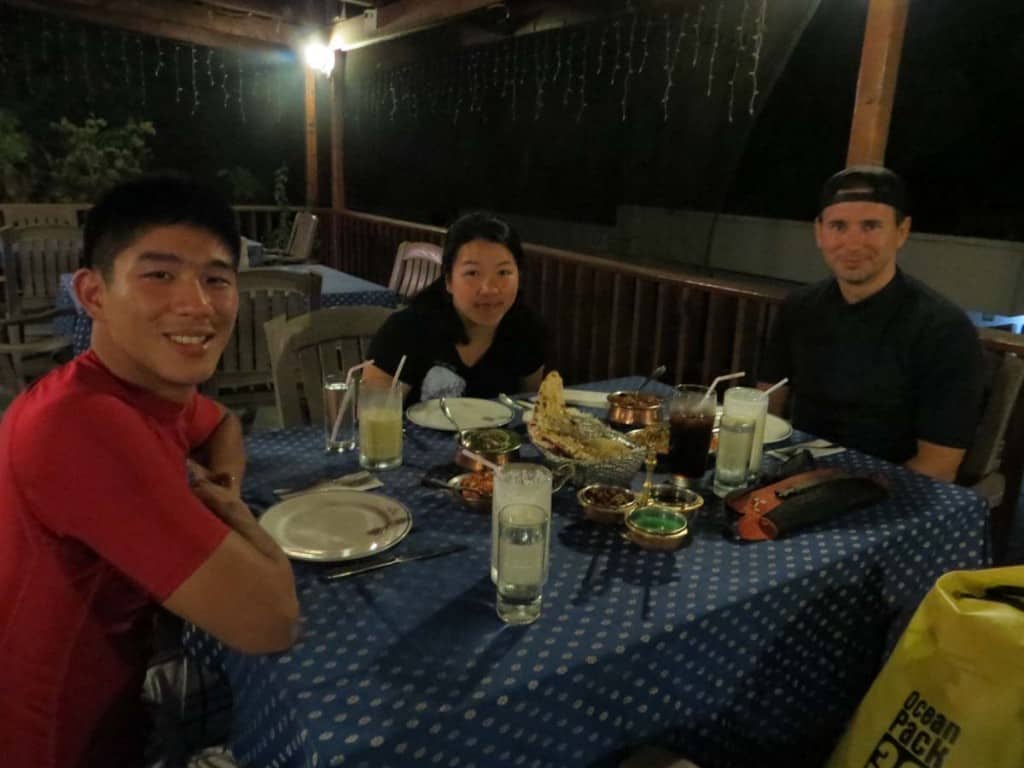 One of the guys, Dennis, decided to join us.  The food was fantastic at Taj.  Never thought we’d have good Indian food in Palau.  Dennis did most of the talking at dinner, telling us about his travels through the Philippines, his love for backcountry skiing and his thoughts on “breaking down” the costs of his Palau trip versus the Philippines.   Joanna seemed totally zoned out while he was talking so I chimed in with a few “uh huhs”, “wows” and further questions to keep the conversation going.

Taking a break from diving, we spend the next day on the island of Peleliu where some of the most intense fighting in the Pacific Theater of War of World War 2.  Read on: Day 69 – Peleliu – A WWII History Lesson.