I checked the weather once I got up in the morning and typhoon was right at our doorstep and just outside of Taiwan.  It was supposed to be on top of us but it looked like it slowed down a bit and wouldn’t hit Taipei until tomorrow.  With that being said it was still raining outside when we were eating breakfast at the lounge.  But I figured that if there was a day to do some outdoorsy stuff in Taiwan it’d be today and not tomorrow when the typhoon is overtop of us.

So after finishing up breakfast I grabbed a Sheraton umbrella and we walked down to the Chiang Kai Shek Memorial area.  The rain wasn’t coming down that hard and at times it stopped altogether.  We were safe as we took a look at the National Concert Hall but just as we went to check out the entrance it started coming down again.  We waited it out a bit but it wasn’t letting up so we walked across the park area to the National Theater where there were a bunch of young kids practicing some hip hop dance moves.  I don’t know what was going on but maybe they were preparing for some “So You Think You Can Dance” kind of audition.  There were at least 4 groups or something out there.  Eventually the rain let up which allowed us to take some shots of the main gate and up to the front entrance of the Chiang Kai Shek Memorial. 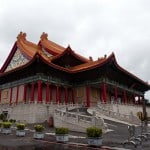 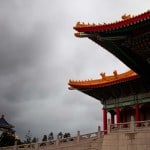 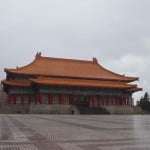 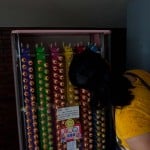 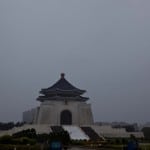 Zoomed in shot of CKS Memorial. 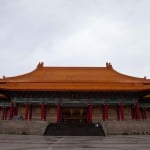 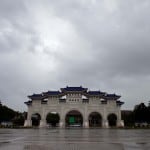 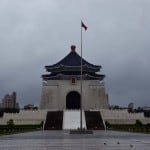 Another frontal view of the memorial. 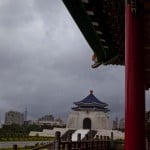 National Theater with CKS Memorial behind. 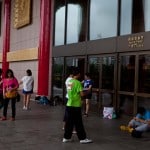 Thought about auditioning myself. 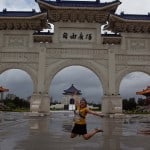 Joanna building up some air. 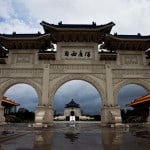 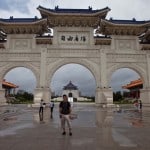 In front of the gates. 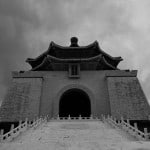 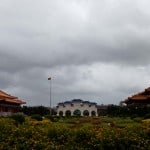 A little bit of everything.

We spent a good amount of time at CKS Memorial.  The CKS museum inside was pretty interesting although I felt like I left with more questions about China’s history and what happened during WWII and Cultural Revolution with respect to CKS.

The rain was coming down again when we were ready to leave but we decided to brave it with our umbrellas.  Our next destination was the original Ding Tai Fung for lunch with a side pitstop at Coco for bubble tea.  The bubble tea turned out to be a bad idea because on top of a very filling breakfast, I wasn’t particularly hungry.  But how can you say no to Ding Tai Fung.  The dumplings, fried dumplings and taro buns were superb.  There’s really no point in eating xiao long bao anywhere else because it’ll just pale in comparison.  Because we picked up a “Friend of Taiwan” card at the airport when we landed the previous night, we received free phone keychains.  This was pretty much the only thing that the thing was good for but I think if we checked out other places in Taipei it’d be more useful.

Me being me, I saw a bakery in the adjacent corner and felt the urge to buy an egg tart.   From there we hopped on a cab to take us to Longshan Temple.  To our surprise, the place was jam packed with locals lighting incense candles, humming, singing, praying to some sort of service.  At first we thought it was some special day but turns out it’s like this everyday.  We took a tour around the place, tip toeing around the intense praying happening.  It was still raining.

From Longshan we walked to some ancient road nearby that seemed to be preserved mainly for exhibition stuff.  It was a great place for photography. 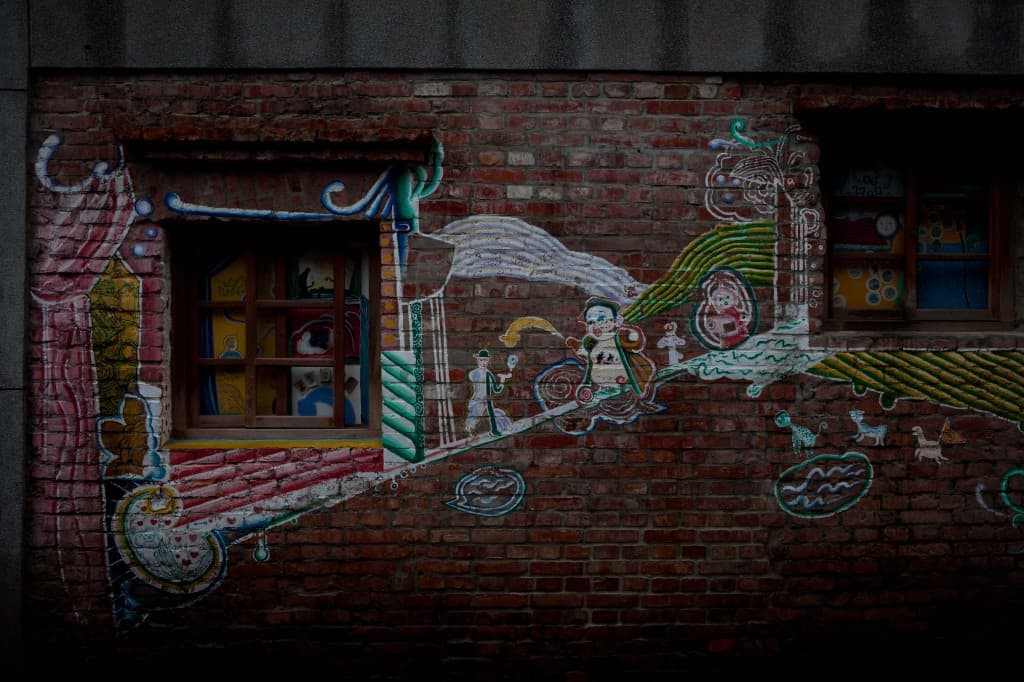 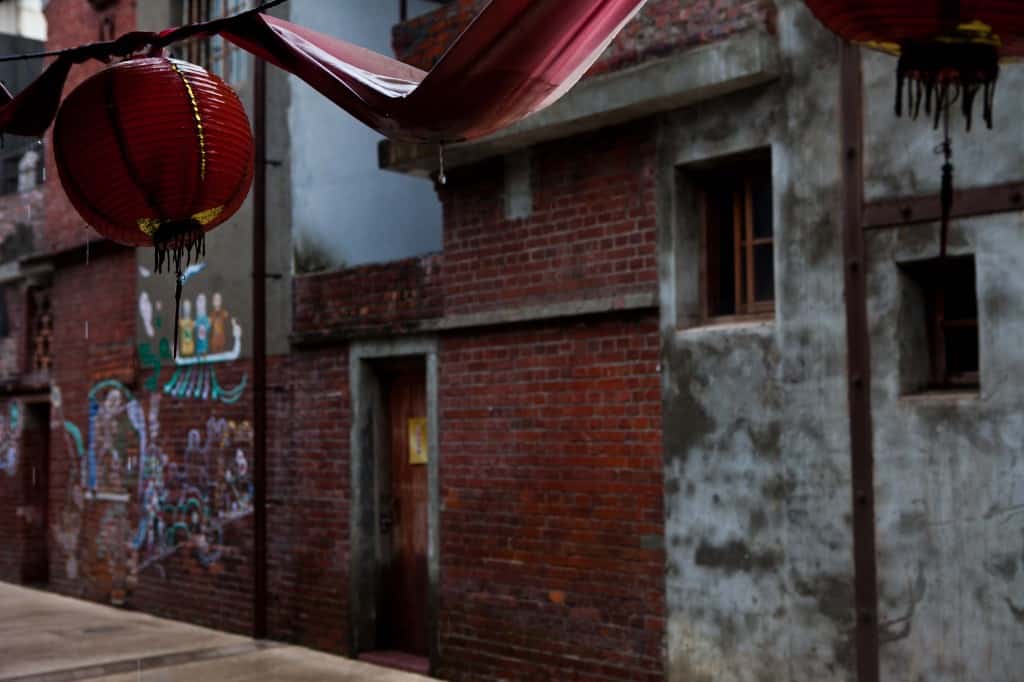 The rain started coming down harder as we walked towards the Ximending area.  On our way we found a multi-floor shopping place that seemed interesting.  Joanna bought a bunch of socks on the first floor and the rest was geared towards guys with model stores, games and guy clothes.

It started raining insanely hard by the time we worked our way around Ximending to find The Modern Toilet.  I wanted to take pictures but it was impossible with one hand on the umbrella.  We ducked inside and we got to experience what it’d feel like to eat inside a toilet lol.  Okay not literally but in some respects it had that bathroom aura about it.  The restaurant is cleverly bathroom themed with chairs replaced with toilets and tables replaced with a tub and glass on top.  To top it off they had cartoon poop as lights.  Essentially everything was decorated with bathroom related things.  I don’t know if they did this on purpose but even the smell was somewhat reminiscent of bathroom cleaning supplies.  What I thought was a bit strange was the sink.  Once I stepped out of the toilet room, I was faced with…another toilet bowl with a faucet coming out of it.  Weird!  Now the food, I can’t say that any of it was memorable.  We weren’t that hungry so we split a curry combo.  In a cute way the curry is served in a mini toilet and one of the sides came with a poop twirl cover.  The dessert was a soft serve twist in a mini squatter bowl.  I don’t think I’d be a repeat customer but just to experience the toilet-ness of the place makes it worth it.  Just don’t expect the food to be good.

We thought about heading up to Shilin for the market but it was raining really badly at this point and we were dog tired from all the walking we did throughout the day.  So we took the subway back home.  On our way back to the Sheraton we noticed that all the floor windows were barricaded with wood and sandbags blocked the secondary entrances. 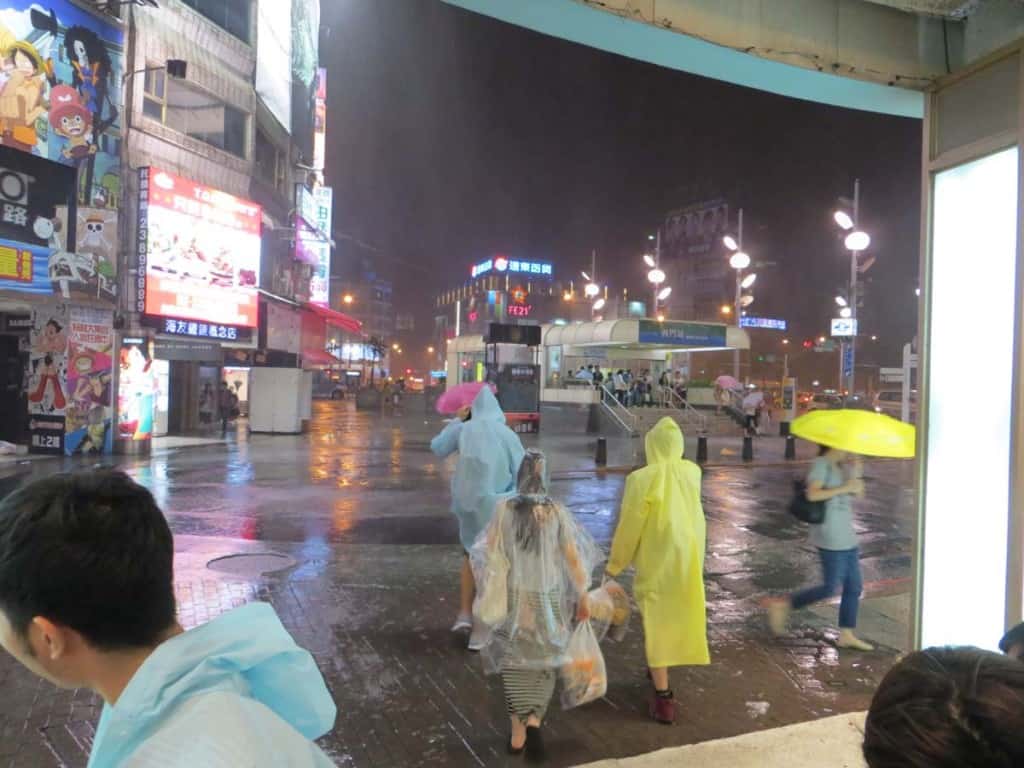 Death of an Umbrella

It was relatively early by the time we got back to the hotel so I thought it would probably be smart to pick up my one piece of luggage I had left behind at the W.  On my own, I took the subway to the city hall.  Outside, the wind was howling and rain torrential.  Luckily I had my big Sheraton umbrella to battle the rain.  After picking up my luggage, I had to roll it outside from the W to the subway entrance.  During that time the wind suddenly changed directions and inverted my umbrella with devastating results.  I eventually made it into the station with my umbrella all mangled.  It wasn’t that bad though as I was able to bend a few things back into position and it looked like it would be salvageable.  Once out of the Shandao Temple subway stop for the Sheraton I was struggling with dragging my luggage and umbrella.  The wind pulled the exact same dirty trick on me and this time there was no hope left for the umbrella.  One of the arms completely snapped.  There wasn’t even a way to fold it back to its normal closed position.  I dragged my stuff the remaining 200 meters and literally dropped the umbrella with the doorman and said “I’m….so sorry”.

Back in the room I checked the typhoon status and it was going to be over Taipei tomorrow morning.

To read about my adventures my culinary adventures in Taipei, check out Day 73 – Taipei – Chillin’ in Shilin