This time the weather reports were right.  Come morning, Typhoon Saola was right overtop of us.  The good thing though was that it was downgraded to a tropical storm so it was really just heavy rain minus the wind.  Looked like all the heavy stuff came the day before when my umbrella got destroyed and our hotel roof was howling like a wolf.

After breakfast we made our way on foot to a nearby tea house called De Ye Cha Chi that I had found online.  We weren’t able to go to Jiufen so I had to find a way to make that up.  I wasn’t even sure if it’d be open because of the typhoon but it looked like we were in business.  It was a small and cozy tea shop that had a traditional feel to it with jars of tea leaves sitting against a wall in the quiet dining room.  I had no idea how the tea part work so I stumbled with my mandarin asking the waitress what each line in the tea menu was.  Eventually I think she gave up and brought over samples for us to sniff.  We ended up picking two leaves based on scent and topped it up with two dessert dishes (I had no problems picking these since they had pictures).  I never thought drinking tea would take as long as it did but there does seem to be some sort of science in the preparation of the leaves and steeping. Our tea arrived pre-cleaned in a tea pot alongside a kettle on top of an oven.  For the next little while we just steeped and drank our tea while eating our delicious desserts.  There was mochi of course and this puffy red bean pastry that opened like a flower. 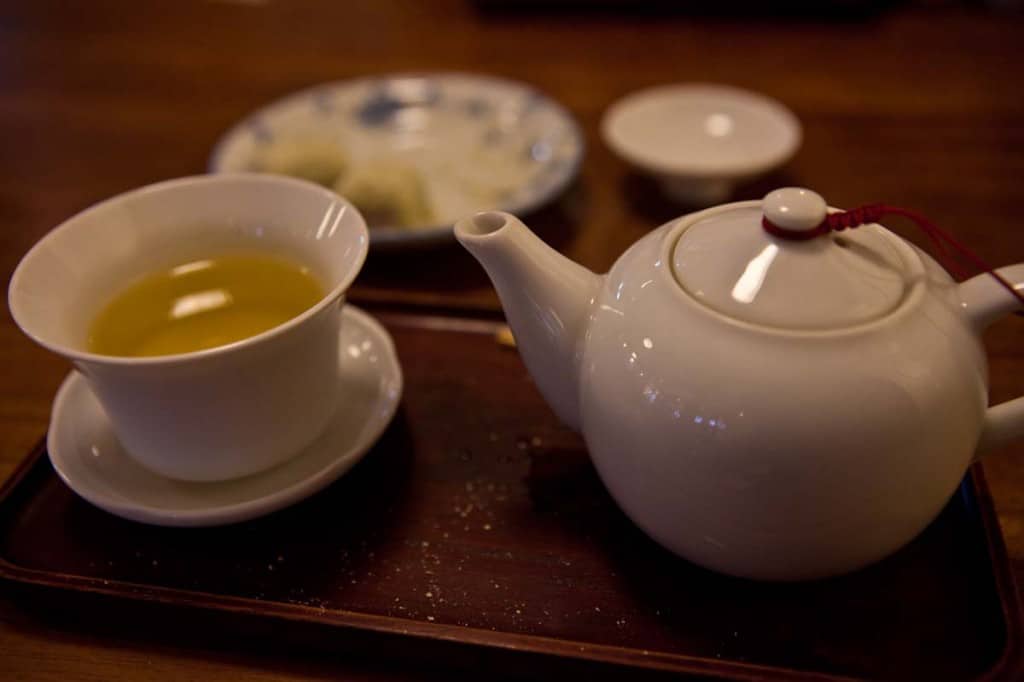 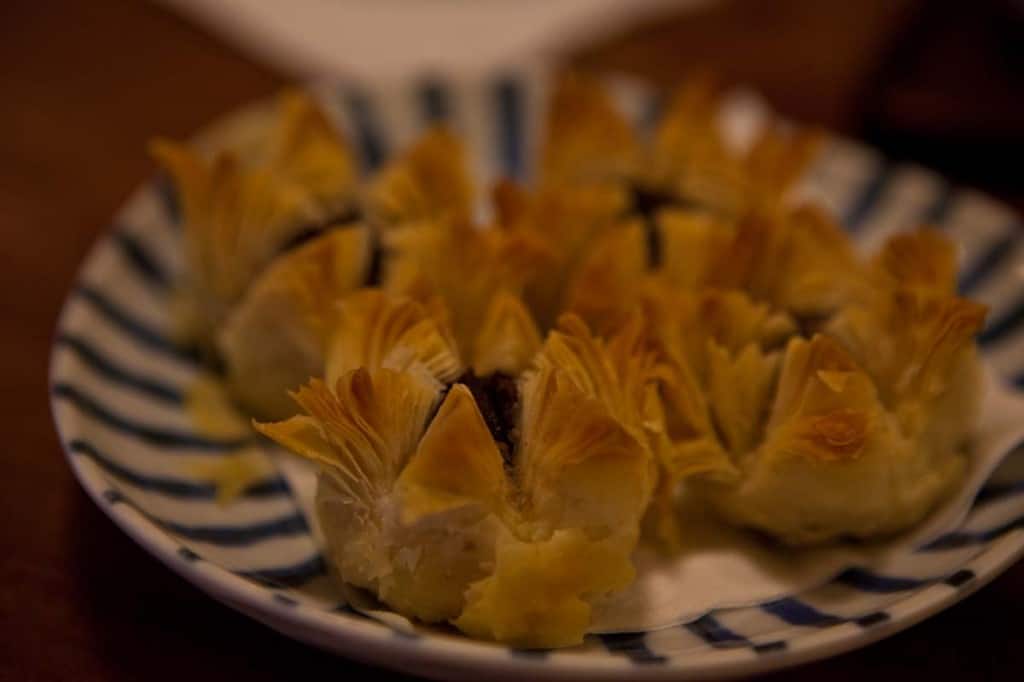 After that we soldiered it to the Taipei Main Station armed with my new Sheraton umbrella.  There is a huge underground network of shopping centers and streets that sprawl from the main station.  The first place we found was this shopping mall near where we entered.  There wasn’t much of interest in what seemed to be a department store until we reached the basement – food court!  I finally got to try food at the bakery Yamazaki, tried a cake, famous fishballs with meat inside, some rice flour cake that tasted kind of like radish cake and of course bubble tea to top it off.  I guess you could say this was our lunch although it was more dessert than anything.

We followed the snaking underground a bit more and found another area connected to the station that just turned into a one floor shopping street lined with stores more for locals and more affordable than the department store earlier.  This part was pretty boring for me.  I swear we spent 2 hours there or something.  Suffice to say Joanna did more shopping than I did.  I think I was the most excited when we found the arcade.  Instead of buying stuff I ended up spending money trying to win a PS Vita in this scam of a game where you have to move this rod left and up to eventually push out a block sitting behind glass with various hole shapes in it.  The tricky thing is that you can only push left and up once.  Once you release the button it’s over.  Yeah I totally got suckered in.  On the arcade side there was this funky new music game where instead of DDR where you use your feet to do different moves to the music, you use your hands to press these blocks laid out in a 5×5 grid.  I had no idea what was going on but I guess coordinates go up on the screen to the music and you just press the buttons like a mad man.  Weird.

After we finished with all that shopping we took the subway to Shilin (which is actually at the Jiantan Station and not the Shilin station as I had thought).  It wasn’t quite dark yet so we walked through the shopping areas first to check out some of the clothes and souvenirs though after awhile they all seemed to sell the same-ish stuff.  I also picked up some pre-game food – Taiwanese sausage and a beef and spring onion kind of yakitori.

As the sun started setting more people started to come in even though the rain was still coming down.  Shilin was really a mega version of Toronto’s night market but with way better food.  You had the games of course which were pretty unique, there were tons of fruit vendors for some reason trying to offer you free fruit (I’m sure if we wanted to we could make several runs along the street aisle to load up on free fruit), and a lot of stalls selling random snacks and knick knacks.  The main event of course was the food and because of the typhoon a lot of the stores without any cover were closed.  Luckily the Shilin Night Market was renovated and they opened up a completely covered underground food court area.  I was pretty impressed with the basement because it was a lot cleaner, organized and less crowded than I thought it would be although a part of that was probably due to the typhoon.  We circled around twice before we figured out what we wanted to try.  Everything we had was delicious.  Over various stalls I tried the sausage stuffed in another sausage, some sort of jelly, grilled squid, crispy stuff and sesame in a mini burrito type of wrap and mango shave ice.  We probably had more but I’m having a brain fart right now.  Again everything was so cheap as well.  A real winner. 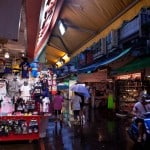 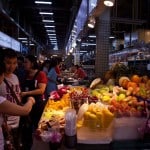 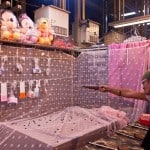 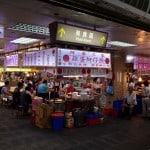 The Shilin sublevel for food-mania. 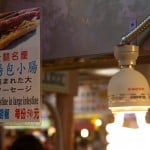 What a lovely way of putting it! 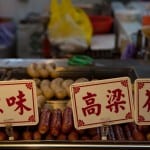 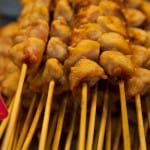 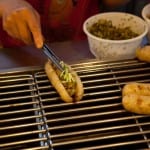 See it looks a lot more appetizing than the description. 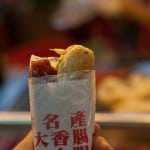 This was probably the most awesome thing I had that night aside from the shave ice. 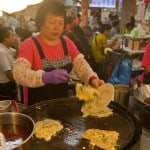 We already had oyster omelette a previous night so we decided to pass on these. 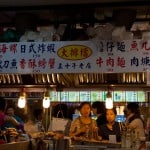 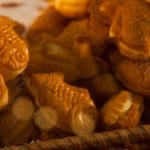 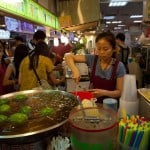 Some jelly filled drink that Joanna got. 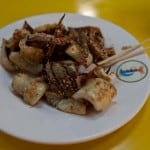 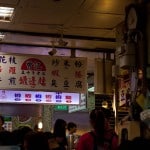 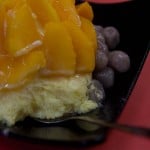 After food we walked around a bit more and eventually picked up MORE food in this awesome combination of grass jelly and tapioca bubble tea.

We didn’t get back to the hotel until just before 11PM.  Just before the lounge closed I asked the lounge to make some breakfast boxes for us since I knew we had to wake up at 6AM and there’d be no time to eat breakfast.

That’s it for Taiwan for this trip.  Want to know what it was like in Japan?  Check out Day 74 – Taiwan to Japan – Reunited!