With our last day in Koh Samui I’m glad we got to get out into the water.  Looking back on my trip with Jia we really haven’t done much of the water sports so this was our last chance.

A trip to Koh Samui isn’t really complete until you’ve done the Angthong National Marine Park.  When you do your research this is the only place that seems to be on the top list of things to do aside from the usual diving or partying around Chaweng.

So I had booked a tour with Samui Boat Charter Co.  awhile ago because they did the smaller groups and took you around to places that were less crowded.  After our hotel pick up we got on the boat in Bophut and then proceeded to pick up a few others at their hotels’ beachfront.

From there we high tailed it to our first snorkelling site for about an hour.  The waters started off pretty calm but out in the open it got pretty choppy.  Initially we all sat inside the protection of the boat’s cover in the back but I figured it was time to work on that tan and get a nice view in the front so Jia and I moved to the bow.  It was a smart move too because once the water got choppy it was easier to focus on the horizon as to not get sea sick.  It was awesome just having the wind pull your skin off your face at those kind of speeds too haha. You can imagine how fast it was going by when we first stepped out to the front of the boat I was wearing a hat and it immediately flew off my head but luckily the captain was fast enough to catch it.

The snorkel site was pretty secluded and as promised was only our group in the water to start.   Jia and I were lucky too because I caught on that the main leader of the group from Samui Boat Charter, Victor, was trying to lead us around the rocks and coral to see a few things but nobody else was following.  He took us through some pretty awesome places actually and the first time that I’ve snorkeled through this sort of tight spaced cavern and passage way out from the caves and out into the open again.  Coral wise it was mostly bleached out because of the shift to warmer water and the fish were pretty standard but a neat snorkeling excursion nonetheless.  Of course me being the idiot that I am, I forgot to bring the battery for my underwater camera.

From there we cruised through the dotted islands that made up the Angthong National Marine Park and made our way to the Emerald Lake.  I was a bit disappointed that this wasn’t the peak viewpoint that my friend Miriam had showed me pictures of but this was pretty nice still.  Victor loved taking photos for everyone which was great so we got all the group shots we wanted. 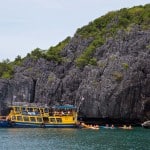 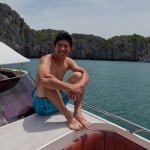 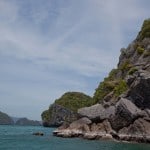 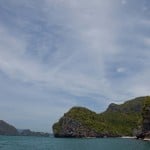 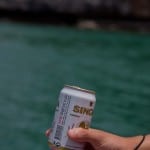 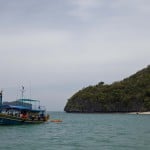 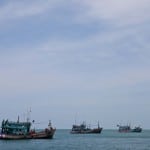 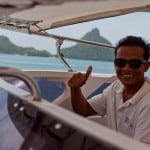 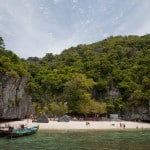 View of Angthong from the steps upwards to the lake 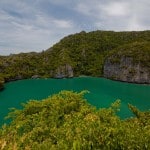 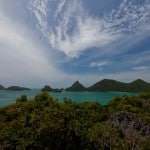 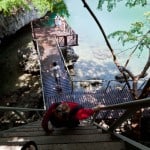 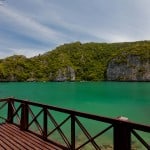 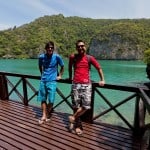 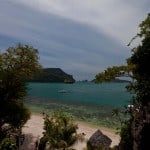 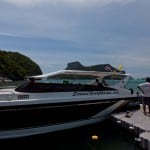 We then cruised a bit more to our lunch spot which was at one of the bigger islands, Koh Ploy.  The unfortunate part here was that when I was sitting out in front I had jammed my lens cap against my leg and the deck but when I momentarily got distracted the sheer speed of the wind running through the boat picked it up instantly and flung it into the water.  The boat turned around to see if we could find it but I knew already that it was already sunk.  Ah well at least it was only the lens cap right?

After lunch, we cruised to this small tall rock that stood in the middle of the water that was supposedly used in one of the James Bond films.  We drove around it and then headed to a nearby shore where there were several other boats doing the same sort of thing.  Kayaks were beached ashore and soon we were out in the water doing our loop around the rock.  Jia and I have done a ton of canoeing before (remember New Zealand?) and so this was a piece of cake.  We had a huge lead on the other people by the time we reached the rock.  Afterwards we just walked around the beach area and chilled in the water beer in hand.

I was most impressed with Samui Boat Charter’s attention to detail from taking our shoes before we got on the boat, getting our feet rinsed before getting on the boat, handing out fruits during the ride and near unlimited amounts of beverages including Singha beer.

The ride back to Ko Samui was equally as rough as on the way there but it was pretty fun riding the sudden bone shattering thumps up and down in the water.  I fully got another shade darker after sitting out in the front all day.

On our way back to the hotel I told the driver I wanted to pick up so local food and he was nice enough to do a quick pitstop at what I call “local thai fast food”  All the people in the restaurant were chilling and lazying about but after we ordered our three dishes (pad thai, some curry and some pad kapow?), everyone was called into action and seriously within 10 minutes they were done everything and we were on our way again.

So when we first checked into the hotel and the lady walked us through the room she told us that as Diamond compliments we got a free bottle of wine.  That was cool and all but I remembered reading on Flyertalk that Diamond members were getting a free hour at the spa.  I asked about that and she said that that was correct and that she could change the benefit over to the spa.  She got that done but then told me it was only a 30 minute foot massage.  I thought that was strange and I asked the front desk about it and told them that other Diamond members were getting full hour spas.  The lady made a few calls and eventually we were upgraded to a full hour spa.  It didn’t end there though.  They offered the traditional Thai massage only but Jia wasn’t going to go through that ordeal again so we asked if the more expensive aromatherapy spa was available.  I wasn’t sure if this was going to happen but we tried anyways.  Luckily we did because they were nice enough to switch us over to the aromatherapy at no cost.  Woot!

After we got back to the hotel we realized we needed to keep our food warm so we filled up one of the sinks with hot water and dunked our bag of food in there lol.  The spa itself was very pleasant and very professional as well.  The lady I had was pretty good though it was weird that I felt like what I was getting on my left side wasn’t always the same as my right side.  It might of had to do with the limits on time and trying to get through all the moves they needed to.  Another thing was that we had to wear the skimpiest underwear ever for this.  I would almost categorize this as a male thong…no joke haha!

We spent the rest of the night eating outside by our infinity pool and polishing off the big bottles of beer we bought when we moved into the Conrad at the Family Mart.

Now all I have to say about Hangover 2 is that it is absolutely terrible.  It was a waste of time and pointless.  I think I fell asleep again trying to finish it off.  We bought the DVD in Chaweng for dirt cheap and the quality itself was pretty good until we reached the last scene when it froze the player.

I close out one leg with a friend and move onto the next part of my trip which begins in Phuket.  Find out more by heading over to Day 27 – Transit – To Phuket – Epic 2 Comes To An End.