With this being my only full day on my own, it worked out perfectly that I could make this a diving day since up until this point I had only completed my eLearning and confined water diving.

After a quick breakfast at the hotel I took the trolley out to the pickup/dropoff lobby at the front.  These guys were extremely late and I at first thought they had forgot about me but after getting the front desk lady to make a few phone calls I found out that they were on the way.   We drove to the south part of the island to reach the docks.  Once there we met a bunch of other people and my instructor, James.  We then had to switch to a truck that drove us across the dock platform to where our boat was docked.

The way diving works out here which was different from say Australia I found was that there’s a difference between the boat operator and the actual diving company you’re with.  Dive companies will purchase a spot on a boat run by various boat operators and so what you find is that each boat will have numerous number of dive companies aboard and a whole variety of people.  It sounds a bit chaotic but I guess it works.  This way dive companies don’t need to have the huge kind of capital to run their own boats as well.

Once the boat got in its way we were invited to some basic breakfast and to go upstairs for a captain’s meeting.  I grabbed some food even though I probably shouldn’t have since I ate already hah.  The meeting was quick and just surrounding the rules of the ship.  From there I met up with James to hand him my PADI papers and talk about what we were going to do for Dive 1.  He seemed like a really knowledgable guy since he had been out here for at least 5+ years and was now doing some freelancing for Sharkey Scuba (the company I booked with).  The only thing with James was that he wasn’t particularly chatty so once we got our business done I just kind of went upstairs on my own to sit around.  The water did eventually get a bit choppy so I made sure I could get some fresh air.   Both dives were around Racha Yai Island.

Dive 1 was more or less like your normal introductory dive.  We only performed a few skills including putting on the equipment, doing the buddy check, buoyancy test and doing a controlled descent and ascent.  For the majority of the session we were just looking around the coral.  I think the biggest challenge of this dive was just getting used to being in the water again and realizing how important controlling my breathing was.  There’s a bit of a delayed effect in diving so when you breathe in you fill your lungs with air so naturally will start to rise but this doesn’t happen until you exhale out, blowing out the air in your lungs which also has the delayed effect of sinking.  The key is to balance the speed of the breathing so you don’t go up and down the whole time and rather plot a straight horizontal course.  It’s a lot hard than it sounds.

After Dive 1 we had some lunch, which included some curry, spaghetti and fruit.  James and I briefed on Dive 2 and also permitted me to bring my camera for this one because we weren’t going to be diving past 10 meters.

Dive 2 I knew was going to be a bit scarier because it involved some dive skills at depth, in particular the flooding of the mask which I hated.   I performed the regulator removal and giving/using of the alternate regulator task fine.  When I had to do the flooding of the mask I had to mentally prepare myself.  I let the water into my mask and I did an okay job of clearing it but I always find a way of mixing up my breathing here so I did end up getting some salt up and into my nose I can tell you is not pleasant especially when you’re underwater.   James was right about one thing though, when you’re taking photos while diving you totally mess up your concentration on other things like breathing so I was ascending and descending all over the place. 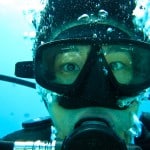 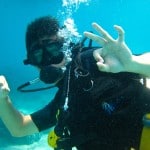 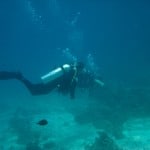 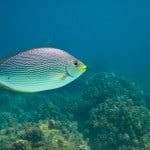 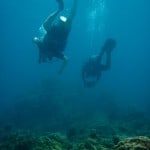 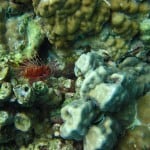 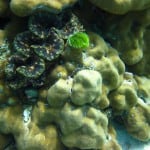 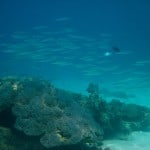 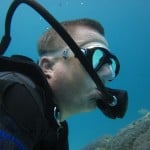 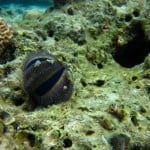 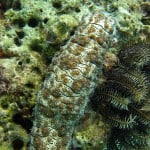 Coral-wise it wasn’t particularly spectacular because everything was bleached out (lacking color).  Fish-wise I only saw a few interesting puffer fish, moray eel and that tiger striped fish with spikes.

Conclusion:  Passed!   It was good to get the first two out of the way.  The last two dives I’m going to have to do in Palau Islands after Shanghai.

I got back to the hotel surprisingly early at 3 something PM.  With this new found time I first wanted to take care of the cab business for tomorrow (to the airport).  I kept the card from the guy who drove me to the airport and so I went up to the lounge to get her to make the calls.  Unfortunately the guy said he was busy so she said she would try to get me some one else for a similar price.  Instead of 500 baht I ended up getting another guy for 700 baht which was shitty but considering the alternative, the hotel transport for 1200 baht, I was okay with that.  Since I was at the lounge already I had a few drinks and ate some happy hour food.

You can’t go to Phuket without spending some time by the water whether beach of pool so I spent the rest of the day doing some reading on the Kindle by the pool near the beach on the property which was fantastic.

By about 6:45PM the sun was almost down so I headed out to Karon beach for a stroll and check out the nearby shops along the main street.  So turns out beaches around here really aren’t that swimmable.  The waves are HUGE and there are signs everywhere that say it’s not safe to swim because of the extreme undercurrents.  Still it was nice to walk on the sand for a good stretch of the beach.  I also picked up a coconut and mango along the way which was so fresh.

For dinner I ate at the hotel’s restaurant Thai Thai which was pretty much deserted.  I brought my laptop down to do some blogging too.  Excellent traditional Thai food but on the more expensive side.

When I got back to my room I started to pack but to my surprise the safety box was totally dead.  I pressed the button but nothing lit up in response.  I called front desk and they sent a lady to check it out.  Turns out the battery in the box was dead.  I guess I had never thought about where a safety box gets its power but it makes sense that it can’t be plugged in right?  She brings a special handheld machine to unlock it so I’m able to get my stuff back but then they go ahead and spend at least 20 minutes in my room figuring out how to change the battery.  They get to the point where they can’t change the battery and so they go to another room to swap the entire door which I thought was hilarious.

Check out the next day

To read about the next day as conclude my adventures in Thailand and make my way to Hong Kong, head over to Day 29 – Phuket – Transit to Hong Kong.