Where I was when I wrote this:  Writing this from a hotel restaurant in Phuket called Thai Thai.

Bright and early we grabbed a quick breakfast at the hotel and got on a cab to Bangkok’s other airport, not Suvarnabhumi but Don Muang, which is the old international airport.  Bangkok ended the way it started, with some guy trying to scam us.  The cab driver tried to talk us early into going fixed fare saying it was a weekend and that the local roads would be fast for 350 baht.  We insisted on getting the meter and guess what it came out to 300 baht.  What a guy.

Now Don Muang is this beaten up, old and neglected airport that honestly looks shitty even considering it may have been the main airport prior to 2006.  Still can’t say anything about the ridiculously cheap flight we got to Chiang Mai for $40.  The flight was on-time and for such a short hop also provided meal service.  To top it off, they turned the nose of the plane into an Angry Bird looking guy – how come no one else has thought of this?

Once we landed in Chiang Mai we were picked up by our trekking tour guide Nikorn.  I seriously had some doubts about this guy as he had been in communication with us throughout the planning phase with Jia but he was never really clear on the itinerary and his e-mails were always really brief.  But there he was to pick us up.  Once we got to the hotel we talked through the two days, what we would be doing and what we needed to pack.  Seemed like a great guy and enthusiastic so I wasn’t too worried.

Check-in process to the hotel worked as planned.  My platinum status on Jia’s non-platinum booking accepted = upgrade to suite and free breakfast.  However the room wasn’t ready yet so we hung out in the lounge area first.

Once we got into our room Jia took a quick nap.  After the nap we took on some of the suggestions Nikorn had for checking out the city.  The only thing we really had time for was this place called Wat Chedi Luang which is this restored temple from 14th century but took until mid 15th century to finish because of stability issues.  From there we went back to the hotel and waited for our pickup.

Our Siam Rice Thai Cookery School pick up was pretty late because two people were late coming back from another tour (they would later join us at the cooking school) but once we did get picked up by these awesome flat bed trucks converted into transport vehicles, we were greeted by this flamboyant Thai guy and in the truck already were two Aussies girls (one would go back home right away because she felt nauseous) and one American guy.  This guy Abe was non-stop talking the whole way about his adventures and love for coconut cream soup so we just listened.  Our first stop was a local market which was really neat because our guide walked us through all the various ingredients that we’d be using in the class.

Arriving at the cooking school itself which turned out to be the owners home we first had some water and rambutan and picked out 4 different courses that we wanted to cook.  I ended up choosing the sour and spicy soup (tom yum family style), pad see-ew, chicken and ginger stir fry and yellow curry.

The cooking class with Nancy (owner) was simply fantastic.  Everything was run so smoothly from the prepared ingredients we were using to changing of plates and preparing cooking supplies when we needed them.  Nancy was a great teacher as well.  She made everything so simple that I couldn’t believe I made all those dishes.  They actually tasted good too.  She would first walk us through the different ingredients involved and one by one we’d cut and prep them.  Afterwards we moved over to the cooking station and used either pots or the wok.  On top of all that she was a lot of fun, cracked jokes all the time and even made us dance.

We started off cooking our soup and noodle dish first.  After eating these two dishes we were already pretty full so it was nice to have a break to make our curry paste which was damn hard work.  I finished mine first but Jia had a bit of trouble with his green curry.  Check out the video.  Once the curry was done we made our stir fry and ate our last two dishes. 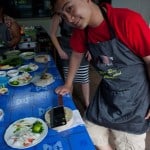 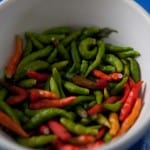 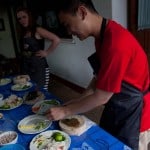 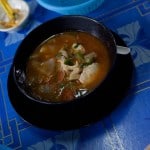 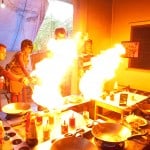 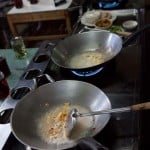 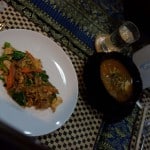 Enjoying the first cooked part of our meal 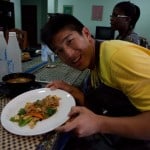 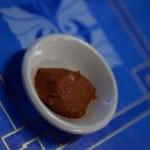 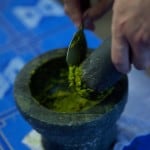 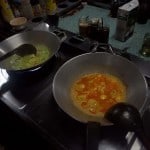 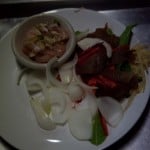 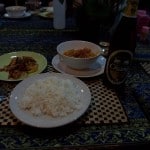 To wrap it all up she handed out to each of us a certificate (which I will proudly display at home now) and a complete cooking book with recipes of all the dishes we cooked and others we didn’t get to do.  I even got her autograph! 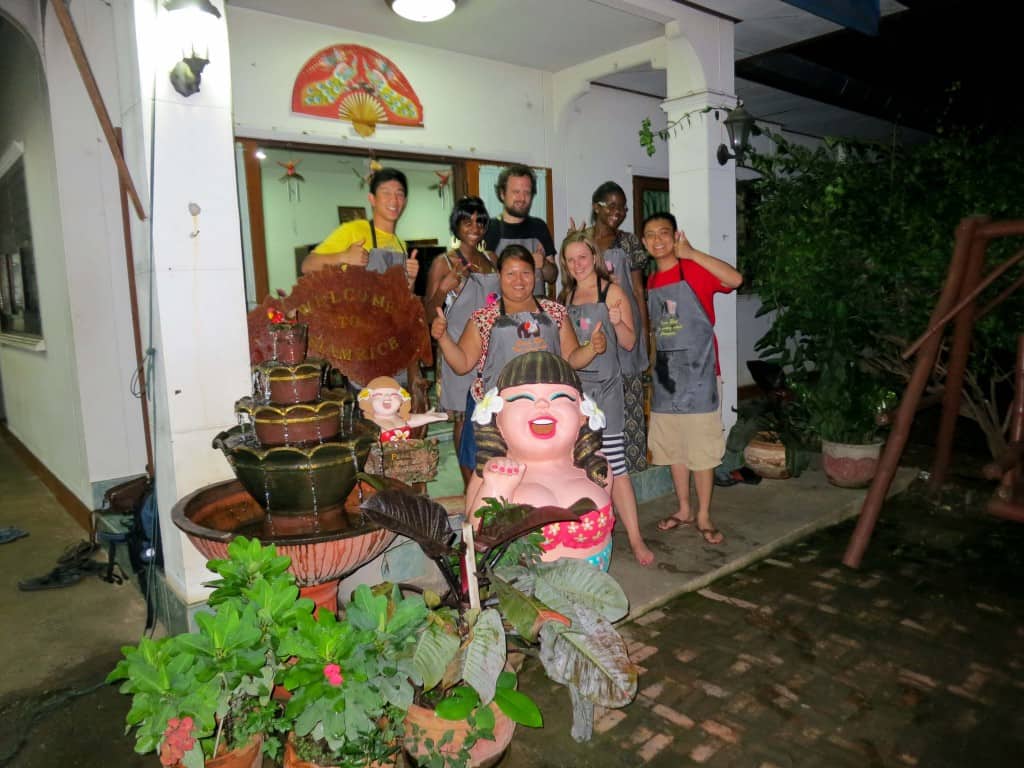 To read about the next day which contains the start of the trek with Nikorn into the Karen hilltribes: Day 21 – Chiang Mai – Nikorn Style Trekking.